The G-Slate, manufactured by LG, is an 8.9 inch 1280 x 800 Android OS 3.0 (Honeycomb) tablet, powered by NVIDIA’s dual core Tegra 2 chipset.  It offers T-Mobile an exclusive HSPA+ Android tablet, just as Motorola  launched the XOOM on Verizon as a 3G model first.  (Sprint and AT&T will soon get their turn with the Wi-FI only model.)  Like the XOOM, there’s no UI interfering with your pure Google experience.

And the Reviews are Coming In!

BGR: Android 3.0, or “Honeycomb” as Google affectionately calls it, is a stopgap build of the Android operating system. I am not implying that this version of the Android OS is a poor effort on Google’s part, I’m simply stating that it seems like a rushed effort intended to tide us over while Google prepares to put its best foot forward… While I do find the Honeycomb UI to be an improvement over earlier Android builds in many respects, I also find it to be a bit too juvenile for me, for lack of a better term. In its current state, Honeycomb looks like a vision of the future from the 80s – like something out of Bladerunner, perhaps… For a platform to succeed it must have a solid developer ecosystem and an abundance of apps, pundits repeat ad nauseam. For Honeycomb, this is a problem…. The build is likely my favorite thing about this tablet. It’s remarkably solid and it has a very high-end feel. It can get a bit hefty during prolonged usage, but this also helps the G-Slate feel substantial and high-end. What’s more, there’s a reason the device is so heavy: the battery life on T-Mobile’s tablet is terrific… the G-Slate’s user experience is hurt tremendously by the sluggishness of the UI. LG may deserve part of the blame as the XOOM was not quite this bad when I used it last, but the bulk of the problem likely lies with Google. Android’s UI is not fluid, and the lag issues carried by most Android smartphones are amplified on the G-Slate tablet… To be frank, it’s simply pathetic that a device with a dual-core 1GHz Tegra 2 processor has such a sluggish interface… Honeycomb tablets don’t have much competition yet, but the G-Slate will likely still be near the top of the heap even once more competition begins to trickle out. 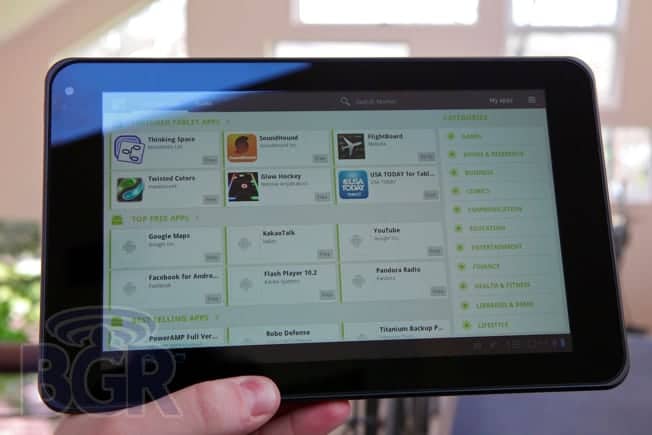 Engadget: It’s a little smaller and little lighter than the 10-inchers, bigger and meatier than the sevens and, by cutting down the middle, it hits almost all the right marks… The plastic back definitely gives the G-Slate a somewhat less posh feel than much of the competition, but that decrease in luxeness comes with a strong benefit: it weighs 1.3lb compared to the Motorola Xoom’s 1.6. It’s just a hair thinner and about an inch shallower and, while it’s a little unfair to compare a nine-incher to a ten in these kinds of metrics, in day-to-day use we didn’t find ourselves missing that extra inch, especially since this is almost exactly as tall as the Xoom. We did, however, notice the reduced weight, and that decrease in width means it feels a bit better balanced in the hand… The G-Slate has three cameras and, unfortunately, none of them is particularly good… So, if you have a T-Mobile voice plan and if you don’t mind another data plan, this is a Honeycomb tablet we can recommend without caveat. But, if you can’t answer the affirmative to both of those questions, price becomes much more of a factor.

GigaOm: Aside from the display, there’s nothing visible on the front except for the camera, which is oddly placed at the top left corner of the bezel. As a result, video call tests showed me looking away from my caller on their end, regardless of whether the G-Slate was in portrait or landscape mode…  As the happy owner of a 7-inch Galaxy Tab Android tablet, I wondered how much I’d like the 8.9-inch size of the G-Slate, considering I dumped the first iPad due to size. I find the iPad too big and heavy to use everywhere or to hold for extended amounts of time, while my 7-inch tablet fits in a pocket and is much lighter. This may be a matter of personal preference, but I’d still take a 7-inch device over the 8.9 G-Slate, all thing being equal… If pressed to compare the software performance, I’d say most apps are a half-step behind that of iPad apps, likely due to Honeycomb and not the G-Slate’s hardware… If you don’t have a 3D television (I don’t), you’re relegated to the old blue and red glasses that come with the G-Slate to see the anaglyph effect. The experience can be hit or miss, but it is a differentiating feature.

Break out the old blue and red 3D glasses to watch this one.

Slashgear: It’s possible to hold it with one hand, but the widescreen-aspect display makes for a long, narrow tablet that soon gets tiring, especially if – as much of Honeycomb is intended for – you hold it in landscape orientation. Build construction is solid if a little uninspiring: sturdy plastic rather than the aluminum of the iPad 2… We often found ourselves smudging the rear lenses when holding the G-Slate in portrait orientation. … We’re expecting to see a push by Google for Honeycomb development at Google I/O, but for now much of the software is intended for smartphone-scale devices and scales accordingly… Honeycomb’s remaining rough edges and lackluster app availability could more easily be overlooked if the G-Slate undercut Apple’s tablet; without that, the price becomes another stick, which will be used against the tablet.

Techspot: The browsing itself is generally quite fast and very accurate, but there are some glitches from time to time. Nothing huge, just some visual quirks during panning or zooming occasionally that clear themselves up… And while the T-Mobile G-Slate could use slightly improved reception, I like it, as a whole, much better than Motorola’s Xoom. It is more comfortable to hold, the G-Slate’s build of Android seems more stable, and I really enjoy the G-Slate’s unusual 3D camera abilities.  It’s still an expensive proposition, though. 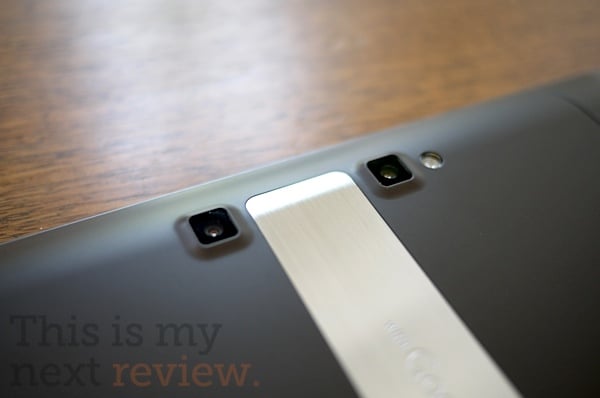 This is my Next, Joshua Topolsky

ThisIsMyNext: While the edges are a little softer and the materials a little smoother here, the overall look and feel is akin to the Xoom. In fact, the devices are almost the identical thickness… Oddly, LG has placed the webcam off to the left corner of the slate (if you’re holding it in landscape mode, which Android 3.0 encourages you to do)… It’s unclear why this strange, elongated shape was chosen, but it never felt quite right in my hands… The software on the G-Slate is identical to Honeycomb on the Xoom, which means the gripes I voiced in my review of that device are still very much present… The big problem for the G-Slate, LG, T-Mobile, and its customers isn’t the gimmicky 3D camera, the lack of an SD slot, or the fact that Android has little in the way of great tablet software. The big sticking point for this device will be the fact that you not only have to pony up $630 just to get in the door, but you’re required to sign up for a restrictive, two-year contract as well…  Score: 6/10

Do these reviews make you want to buy a T-Mobile G-Slate today?  Have you had your eye on this tablet already, or are you waiting for something else?  Share your thoughts below on this intriguing 8.9 inch tablet with 3D recording.