The pictured Motorola phone is a brand new device that looks a like a departure from what we have come to expect from the Droid family. It has a silver rounded shell in stark comparison to the all black designs of the Droid X², Atrix, and Bionic. The angles and lighting in the picture do not allow for any conclusive information, but do feed the rumors of the quad core Tegra 3 Targa, Bullet, and Jet that have been going around as of late. 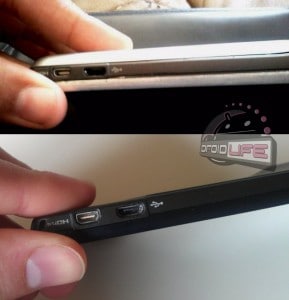 As you can see the large rounded silver backing is the major differentiating factor between the unnamed device and the Droid X. The middle black side of the phone looks identical to the X however, it could be a modified version of the X² or simply a fake device someone claimed as a new leak.

Droid Life was told that it is a new multi core device that incorporates a qHd display and Moto’s new 12 megapixel camera. The silver back is said to house a 1900mAh battery and 4 of these phones are said to be currently testing.

If this does turn out to be the Targa or the rumored updated Droid Bionic then this is is great news that the device is testing already. Whatever the case may be Motorola is definitely on a high speed path towards quad core with a Tegra 3 device. Do you guys think the pictures are real, and are you excited to see a Tegra 3 super phone from Motorola?