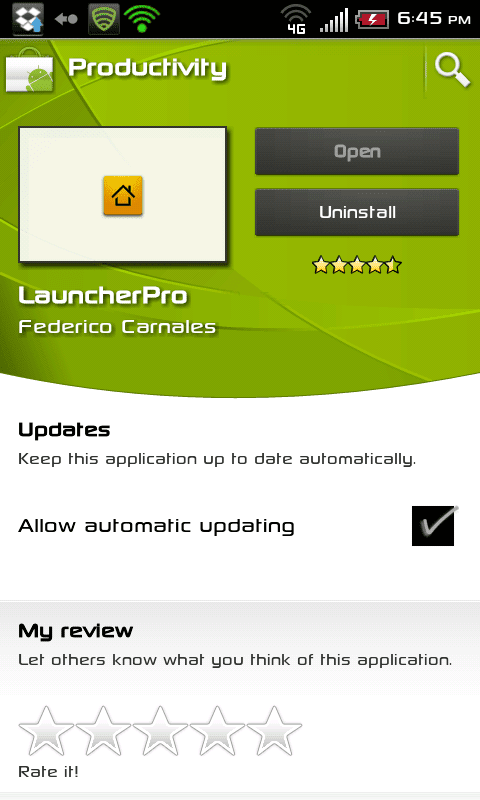 Skinning Support, Another Reason to use Launcher Pro

There are a lot of launchers and home screen alternatives available on the Android Market and I can honestly say I've used quite a few of them. My personal favorite however is Launcher Pro. The beta version of the

latest rendition of the launcher was released last week and already some of the people over at XDA (and other developers) have released skinable widgets and such. Which brings me to one of the better features, and ideas for that matter to hit a home screen alternative in a long time, skinable widgets. This is a very cool feature for those of us who have purchased the un-locker ("Pro version" )and I've had the pleasure of giving some skins a whirl on my Evo and I must, say I can't wait to see some of the things that will be done with widgets and icons in Launcher Pro going forward.

If your one of the people who had the annoying fc (force close) problem due to issues in past editions of Launcher Pro, you will be pleased to here that this problem has been fixed with a few tweaks to the way the Launcher is handled in the memory causing it to consume less memory and thereby significantly increasing it's stability. So head on over to the market and give Launcher Pro a try you won't be disappointed. Don't forget to try out some of the skinable widgets already on the market as well(example below bottom most image is skinned). Skinable widgets, good luck trying to say that one seven times fast.