HTC Merge Posing All Over

Who doesn't love a good quality spyshot? The HTC Merge is by no means a secret, but new screen shots are something us tech blogs can't get enough of! Our friends at pocketnow, who posted these new pics,  are no exception to that one!

I believe this will be the first HTC Android phone on Verizon with a keyboard, which is good because more and more companies are giving up on that. This guy is rumored to be released as soon as next week! The phone is however rumored to not have the Android Market when its released  in Canada, nothing official has been said.

Other things that might not make this "the phone to buy" is a lack of LTE support (which does date the device when you consider a 2-year contract), Bing integration, no front-facing camera, and no dual core processor. Based on that list I wouldn't be surprised if this was a $99 phone to be honest, but that price point could appeal to many people on a tight budget. Check out another pic of the device below, and let us know if this is the HTC Android phone on Verizon you've been looking for*!

* share this story on your favorite social networking site for the AMAZING Star Wars reference that has NEVER been done in regards to DROID phones!!! 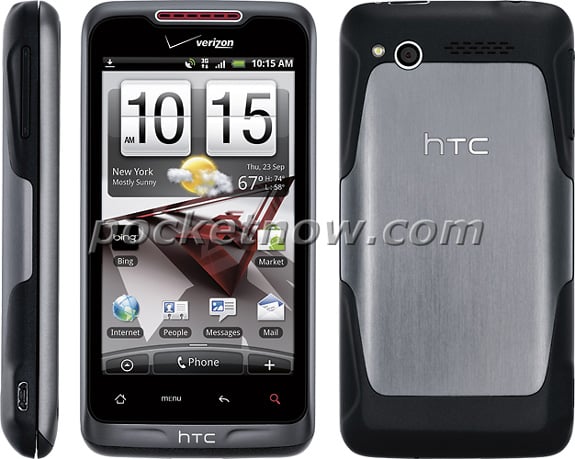