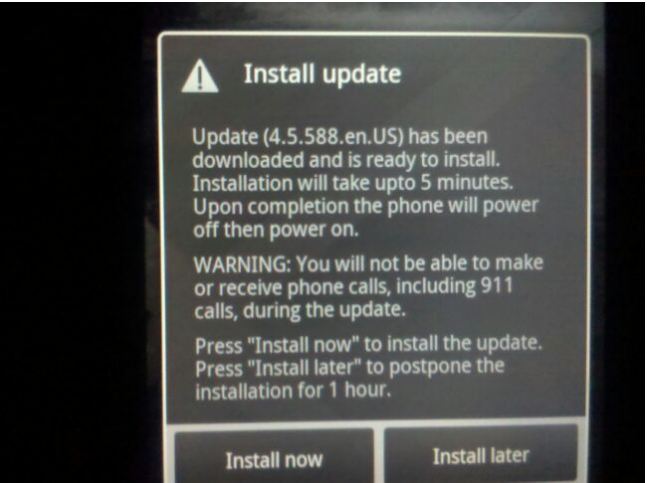 [Update 1] See end of story for any new news, unless there's a correction.

Well, if you've been following all the twists and turns in this Android OS 2.3.3 (Gingerbread) update to the Motorola DROID X story, you'll have an idea why yesterday's article had [Update 2] seven different updates to it (including one issued earlier today).  Here we'll try to consolidate all that information as cleanly as possible and summarize it for those of you just joining us.

A number of sites have been putting out some incorrect information; if we have anything wrong here, please let us know so we can fix it.  So, that said, here's what we do know, and what we can report is not true despite being covered elsewhere.

A very small number of users have received an over the air (OTA) download of a new OS build yesterday.  While the zip file had the same name as the current Android OS 2.2 (Froyo) build 2.3.340, it is not Froyo.  It is Gingerbread and it is build 4.5.588.  That is a later build than the one leaked a couple of weeks ago (4.5.573) after a rumored OTA Gingerbread update that didn't occur.

One recipient of this limited OTA update, HarleyDude, did not install the download because he didn't know what it was.  He posted his story on Droid X Forums, and had the download file sent on to P3Droid of TeamBlackHat. P3 looked it over and said this is indeed a signed Gingerbread release.  (The leaked Gingerbread from two weeks ago was not signed by Motorola.)  Because this file is signed, it can be installed using System Recovery over a stock 340 build without any special hacks.

Got Root?  Not After Installing This You Don't

But this Gingerbread install will take away your root, however you can roll back to Froyo buld 340 if you wish.  If you have any other changes to stock Froyo (missing files, different ROM, bootstrap, etc), the install will fail.

P3Droid was able to root the install last night and a number of DROID X users are eagerly awaiting a procedure on how to do the same.

What We now know is Wrong (But Got Reported Anyway)

This was a hot story, and a lot of information was propagated quickly.  While the data moved at the speed of light, the facts are taking longer to catch up.

Not Silent At All

A number of sites, including us, reported that the OTA download and install was a silent process.  This is incorrect.  As you can see from the dialog box above, the build is not installed unless you actively permit it.  If you don't want the build (say, because you want to be sure you can root the phone), then delete something, like some bloatware, and it cannot install.  But it won't install unless you tell it to.

The term "silent" probably referred to how the phone downloaded the file but again, it did not install anything.  If you remember the Froyo update, in that case you were prompted for whether to begin the download, and for that matter, you could initiate it.  [Update 2: the device did inform HarleyDude there was a download but did not ask for approval to initiate it.]

Bootloader is not One-Way

Another incorrect report was that there was a new bootloader that prevented you from rolling back the install to Froyo.  P3Droid found that you could indeed recover to the 340 build via SBF file.  With all the news about Motorola's locked and signed bootloaders, the confusion isn't surprising.

It's been surmised that the install file has the name of the last official build (2.3.340) because this is a test OTA install; users who received it can easily install the ultimate official build over it once it goes out.

Several sites linked to and summarized the Verizon document listing what bugfixes and improvements came with the 340 build.  Since the leaked Gingerbread file had the exact same name as the original OTA Froyo update, they incorrectly assumed this PDF listed Gingerbread improvements.  They are not.

That document is dates from December, 2010 and was for the Froyo update 2.3.340.  Many people have confused the OS version with the system build, so that's why that error happened so often.  As of now there is no official Verizon document released to the public listing improvements from this Gingerbread build 4.5.588, or any other OS 2.3 build.

There is NO Official OTA Update Now

A number of sites also reported that this was an official OTA going out now, or overnight.  That doesn't seem to be the case.  Very few users have reported getting the download, so this appears to be what Motorola calls a "soak test."  A soak test sends a software update to a limited number of participants in the Motorola Feedback program.  While HarleyDude isn't in this program, another user mentioned yesterday is in it.

Interestingly, there is no official comment from Motorola on their own forums about this update.  But anyone who posted links to the Droid X Forums had those links edited out quickly enough.

In addition, CellZealot of TeamBlackHat reports that the build is dated 4/10/11, and while it is indeed signed by Motorola, there are  oddities about it compared to the usual OTA update files.

What Has Changed Since Yesterday

So how to stay on top of a fast-moving story like this?  Honestly, you can't, unless you don't follow anything else.

I Haz Ur Root

TeamBlackHat expects to have something out within a few hours that can enable root on this leak, probably an update to their TeamBlackHat app (not available currently).  If you want the new rooted version, you will have to reinstall it, so you may choose to hold off on installing the leaked (no root) Gingerbread file, whenever that hits.

In the meantime, a number of sites that mirrored the leaked file were issued C&D (cease and desist) notices and had to remove the files.  New mirrors are up but don't expect them to last long.  Motorola owns these files and has the right to ask them to be removed from servers.

HarleyDude, The DXer Who Started It All

I had an email exchange with the person that started this all, HarleyDude.  Here's what he had to say that he wanted everyone to know (links added by me):

Hi Maddi, Glad to help.
Install is not silent, user is given the choice to install or wait, it does not start on itself, or on reboot, only when you select to install. I have been frequently updating the original post with any new info, so keep your eyes on that, but most of the recent "noise" has been nothing new. a Also, it has been verified that you can roll back to Froyo, new bootloader or not. Also, I believe robrowald said he was in the Motorola feedback program
cheers,
-Steve

What to do if your Sync Icon Won't Go Away

Not included in yesterday's file was how to do a data wipe.  It works differently under Gingerbread.  You may need this as some people installing this leaked file are reporting that the sync icon won't go away.  In fact you may need to wipe data, wipe cache, and factory reset multiple times.

Question: How do I get to data wipe now?
Answer: (thx Mike7143) With the phone off hold the home key and power button. Then the triangle should show. Press both volume up/down keys. You should now be able to use the volume keys to move up and down. Scroll down to something similar to erase/clear data. Select with the power button. When it's done, select the clear cache. When that's done, reboot.

Now?  You decide if you want to install this leaked build on your Motorola DROID X.  It is officially signed by Motorola, it is not a hoax.  But it's not an "official" OTA build either.

Needless to say, we'll keep an eye on major developments.  Let us know what you think of all this excitement in the comments below.

[Update 1] Here is yet another mirror; the site owner says this link should have faster downloads than the other mirrors.  Also, owner is practically asking Motorola to send a bus full of lawyers over.

[Update 1] The Road to Root

TeamBlackHat has been working out a rooted version of this build, and at least one brave user had success with it.  User mycahya was able to install the rooted version over the leaked build 4.5.573 by the following method:

Root process is confirmed working. For those curious, if you have a bootstrap recovery backup made, you can restore just the DATA portion of it after you have flashed the rooted leak. Steps to restore your data are as follows:
1. reboot into recovery
2. select backup and restore
3. select Advanced Restore
4. select the image from which you would like to restore data from
5. select Restore data
6. Reboot

Previous to this, TBH said this would be the method to install the rooted version of 4.5.588:

You will be able to restore your data from the leaked 4.5.573 build:

if on leaked GB make a backup of your phone, directions will be posted on how to restore data after you upgrade to new leak.

This is It!!!!  DROID X Gingerbread with Root!

P3Droid's full directions (over at MyDroidWorld, registration may be required).

Good now that you have read above the you are ready to proceed.

1. Your phone must be in the following condition before you can use the patched updater.

2. Have you gotten your phone in the proper state to upgrade to the newest leaked Gingerbread. Yes go ahead, if No go back to step 1.

Most testers have installed this over the of 2.3.340 firmware without the need for a wipe, about 15% did wipe, the choice is yours.

1. Perform a backup using Clockwork recovery
2. Downgrade to the 2.3.340 firmware
3. Follow the above procedure to upgrade
4. After upgrading enter into Bootstrap recovery
5. Perform an Advanced Restore —-Select Data

Here's the link to the new Deodexed and rooted build.  This takes you to Multiuploader and you will get Gingerbread_2.3.588_deodexed.zip (148.76 MB).

What is Deodex?  Click and learn.  The TL;DR version: .odex files are in application packages, or APKs, to save space, but make hacking more difficult since portions of the code can be relocated.  Deodexing puts all the code back in the APK into .dex files.  This prevents code coming from external locations.

[Update 2] Thanks for the Mad Props!

And a shout out to TeamBlackHat, not only for all the great work they've done on getting you a rooted version of this build, but for the props on this article. 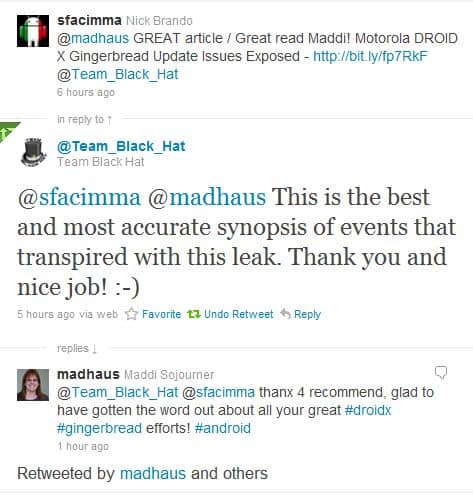 Thank you also to HarleyDude who linked here from his intial article in the monster thread that got this started (that thread is now up to an amazing 1450 posts), and to@sfacimma for bringing this post to TBH's attention!

Please check the link above to make sure nothing has changed, and again, if you don't understand this, don't install it.  As soon as we hear anything about Gingerbread coming officially in the OTA, or an easier root method, we will let you know.  I suggest you read through the comments in the thread if you plan on doing this, as many questions are answered there as well.

Let us know if you try this and how it goes for you.