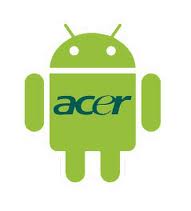 Acer has priced their ICONIA TAB tablets with Android OS 3.0 (Honeycomb), giving them a release date of the 20th April.  The ICONIA TAB comes in two sizes, 10.1 and 7 inch screens, and two communication options: with or without 3G ability.  And now you can pre-order all four models on Amazon UK.

Here's the Acer Aspire ICONIA TAB 500 and 501!  The 10.1 inch screen is powered by a dual core NVIDIA Tegra 250 Cortex A9 processor. The capacitive mutli-touch WXGA display has a resolution of 1280 x 800 with full HD 1080p playback and via a HDMI port you can display images and video on a TV. Everything is housed in an aluminum casing and has a 5 Megapixel rear camera and a 2 Megapixel front facing camera.

In addition, there is the option to buy either ten inch model with a bundled keyboard dock for an additional fifty pounds.  You can find this option here for the 3G version, for £579, or here for the Wi-Fi model, £529.  This effectively turns your tablet computer into a netbook or notebook.

If you're looking for something a little smaller, the Acer Aspire ICONIA TAB A100 7 inch tablet (at top of article) comes in at £299.99 for the Wi-Fi only version. It too is run via a Tegra dual core processor  and is also running Android 3.0 with 512 MB of RAM, ignore the 512 kb that Amazon has up on these pages. There is also a choice of a 3G version, the Acer Aspire ICONIA TAB A101 which will set you back £399.99.

A is for Android

If you're checking out the Acer tablet lineup, remember to make sure the model number has an A in it.  Acer also makes Windows tablets, and the model names are identical save for swapping in a W.

Let us know if these dual core Honeycomb tablets are on your shopping list!  What do you think of these Acer tabs?