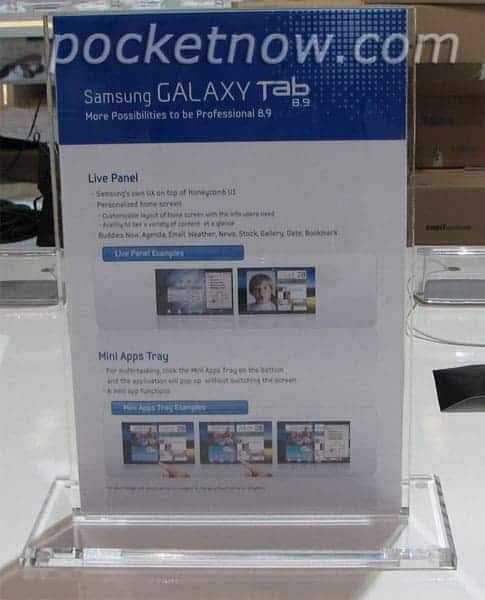 Lets face it, it would have been a surprise if the Samsung Galaxy Tab 8.9 hadn't been leaked in some way before its official release tomorrow. Thankfully pocketnow managed to get some very interesting photos which gave us some insight into what we should expect.

Hardware wise everything looks great. A 8.9in screen with 1280 x 800 resolution should make sure films, apps and pictures look crisp and clear. At 8.6mm thin and weighing in 470 grams it should be very portable, and thanks to a 1 GHz dual core processor it should be very speedy. RAM and storage sizes are not yet known (or camera(s) resolution) but expect them to be similar to the Galaxy Tab 10.1.

On the software side things could get controversial. As stated in the title the Samsung device will come with its own UX overlay on top of top of 3.0 Honeycomb called Live Panel. Not much is known about it so far but skins can be a deal breaker for a lot of people. Personally I like my Android to taste Vanilla but due to the specs on this tablet more people may be willing to overlook this. Also software wise is a Mini Apps Tray which allows you to switch apps Blackberry Playbook style. Again not much about this feature but it does seem highly intriguing. 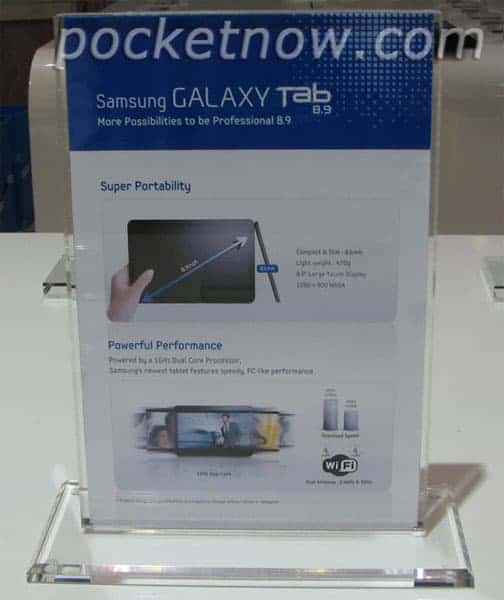 Hit the comments below to tell us what you think about this latest leak.