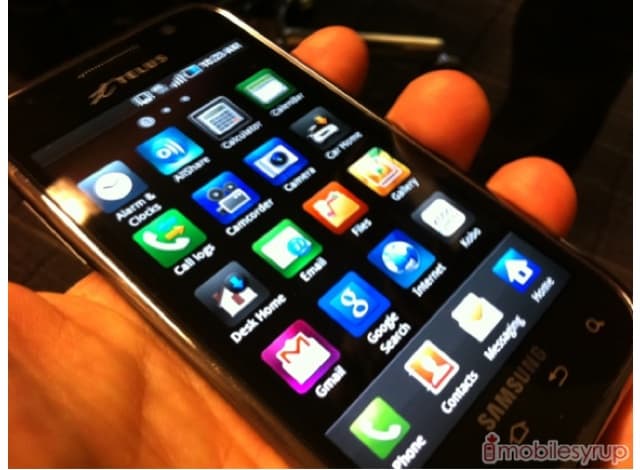 Advertisement
Advertisement
Samsung being the choice for Canadians and their mobile fix have a rather special guest coming to Telus, hopefully within the next two months, in the form of the Samsung Galaxy Fascinate 4G. This to be the first 4G handset released to a Canadian network and it comes loaded with Android 2.2,Froyo with an update to Gingerbread in the works which has been confirmed for the  European Galaxy S. You'll be powered by a 1GHz processor underneath a 4inch Super Amoled screen as shown by the picture thanks to the guys over at mobilesyrup.
On the back you'll have a 5 megapixel snapper with a 4 x digital zoom and on the front a camera to take advantage of video chat over Skype and the like.  If you like your music the Samsung Galaxy S 4G has 16GB of internal storage and you can extend that with a microSD card. It has been reported that you'll be able to get download speeds of 21 Mbps or Megabits per second which is pretty quick.  Samsung and Telus are very excited about this and of course the people that matter are you, so are you excited about it and will this be your next upgrade? While you think about that here's what Samsung and Telus had to say about it all.

ON – TELUS today announced the upcoming release of Canada's first 4G
smartphone, the Samsung Galaxy S Fascinate 4G with manufacturer-rated
download speeds of up to 21 megabits per second (Mbps). The Samsung
Galaxy S Fascinate 4G is available from TELUS and is 50 per cent faster
than the manufacturer rated speed of any other smartphone in Canada,
allowing users to download, browse and stream video faster than ever
before.
Boasting a crisp four inch super AMOLED touch screen, the
Samsung Galaxy S Fascinate 4G is optimized for presenting vivid colours,
offering users a superior viewing experience while watching HD movies,
playing games and reading e-books. Powered by Android 2.2, (with 2.3
coming later this year) the Samsung Galaxy S Fascinate 4G lets users
create their own lightning fast mobile Wi-Fi hotspot to surf the web on a
laptop or tablet from wherever they connect to the TELUS 4G network.
Equipped with a 1GHz processor, the Fascinate 4G is powerful enough to
run multiple applications at once.
"We are thrilled to be working
with Samsung to offer Canada's first 4G smartphone that combines ultra
fast download speeds and advanced smartphone capabilities," said David
Fuller, Chief Marketing Officer at TELUS. "TELUS is committed to
offering our customers the most advanced technology and the richest,
most powerful mobile experiences available. The Samsung Galaxy S
Fascinate 4G is a great example. It will be the fastest smartphone in
Canada a running on Canada's fastest coast-to-coast mobile 4G network*."
"Today's
launch by Samsung and TELUS is another example of how we are leading
the way for Canadians, as they embrace the power of wireless technology.
We are excited to offer the first smartphone in the country to support
4G speeds, for the fastest access to video content, web surfing,
downloading and more," said Paul Brannen, Vice President of Samsung
Mobile Canada. "Samsung, as the country's top Android manufacturer and
top wireless handset vendor, is committed to being at the forefront of
technology innovation**."
Powered by Android 2.2, the Samsung Galaxy S Fascinate 4G also features:
– A front facing camera for easy video chat
– A 1650 mAh battery for long battery life
– Uncompromised web experience with Adobe Flash 10.1 for a rich browsing exprience
– 5.0 megapixel camera with 4x digital zoom
– Google Maps Navigation providing turn by turn voice guidance and new Google Maps in 3D. Available only on Android.

– Access to more than 100,000 free and paid applications from the
growing Android Market, as well as the ability to store apps to the
device memory card to free up phone space
– Expandable memory up to 32 GB (16 GB microSD card included)
– Seven home screens to customize with the widgets and apps for at a glance information and updates
Stay
tuned for pricing and availability of the Samsung Galaxy S Fascinate 4G
at TELUS. Please visit www.telusmobility.com/phones later this week for
updates and additional information.
*Based on TELUS' tests of
data throughput speeds in large Canadian urban centres available from
national HSPA+ service providers. Internet access speed provided by the
network operator may vary due to the device being used, network
congestion, distance from the cell site, local conditions and other
factors. Speed on the Internet is beyond the wireless network operator's
control and may vary with your configuration, Internet traffic, website
server and management policies, and other factors. Coverage maps are
approximate. Actual coverage and network services can vary and are
subject to change.
**Samsung is the market leader for Android
mobile phone shipments in Q4 2010 with 34 per cent of the total market
share according to IDC Canada's Q4-2010 Mobile Phone Tracker. Also
according to IDC Canada, in Q4 2010 Samsung continues to be the #1
mobile phone vendor in Canada.