Microsoft has filed a lawsuit against Barnes & Noble, as well as its device manufacturers, Foxconn and Inventec, over its use of the Android operating system in its popular Nook e-reader.

The suit is based on an argument that is by now familiar: Microsoft alleges that the Android platform contains a number of technologies which infringe on Microsoft's patents, of which the software giant holds many. Therefore, to exercise its intellectual property rights, Microsoft is demanding licensing fees from all manufacturers of Android devices. 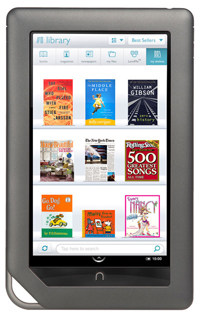 Losing in the Market, MS Competes Through Legal Channels

It's no secret that Microsoft has not fared well in its attempt to capture a significant chunk of the mobile market. Handsets based on the Windows Phone OS are not selling nearly as well as either Android-based phones or the iPhone. Apparently unable to compete in sales numbers, Microsoft's current attack is to use legal channels to slow the advances of its arch-rival, Google.

This line of attack could benefit Microsoft in a few different ways. If they win in court, they can force Barnes & Noble to pay damages, thereby recapturing some income, and also setting a precedent to allow them to go after other manufacturers. Continuing with this strategy, they could conceivably force Google to make changes to its Android OS, providing major setbacks to its development. And ultimately, they may be hoping that manufacturers of Android devices will grow weary of the legal battles and financial risks, and turn to developing phones for a different platform.

The patents in question cover a wide range of Android functionality, including "natural ways of interacting with devices by tabbing through various screens to find the information they need; surfing the Web more quickly, and interacting with documents and e-books." Whether  these claims will hold up in US Federal Court remains to be seen. But the lawsuit itself can certainly do some competitive damage to Google and Barnes & Noble. We'll keep you posted on further developments as they emerge.