Hulu Plus on Android: Soon on Some Devices

Hulu fans get ready.  Hulu has recently added a nice little graphic showing an Android device, namely the Samsung Nexus S, along with a “coming soon” tag to their Hulu Plus site.

Now along with the Coming Soon tag, it says “to select Android OS 2.2 phones.”  Froyo required, then? I would assume that it would also work on Android OS 2.3 (Gingerbread) as well, since it shows the Nexus S above.  As to when it’ll launch and which devices will be compatible we’re not really sure.  Being a huge fan of Hulu I am pretty excited. 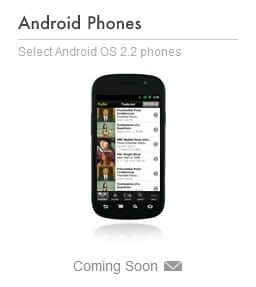 Hulu Plus on Select Android Phones?  Which Ones?

Hulu Plus currently offers High Definition 720p along with the full season of 45 TV shows from most of your favorite networks.  This service is currently set at $7.99 a month.  We’ll keep you updated on which phones will get this service (hmmm… the same ones that will get Netflix?  It’s a DRM thing, huh?) along with when it will launch on Android.  Is 8 bucks a month worth it for Hulu Plus on your Android device?  Let us know.