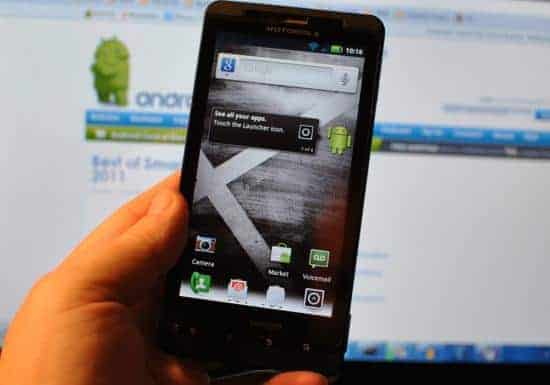 There were rumors last week that the official Android 2.3.3 Gingerbread for the Droid X would be released on Sunday. Well that did not happen, because Verizon apparently sent the build back to Motorola but not before a copy got released to the community. The Gingerbread leak available for download now runs great and appears to be the official version Motorola originally planed to release with a nice update to MotoBlur.

The update to the MotoBlur UI brings some key enhancements the main one being an actual customizable launcher.  As in the photo you get four icons default being Dialer, Email, Text Messaging, and the new App Drawer. With a long press you can swap them out for whatever you like.

The new App Drawer has also been enhanced and you can now customize groups of applications. There is a new Profile option with Work, Home, and Weekend options and overall its a much improved experience that can finally rival the HTC Sense UI. Check out the video and let us know what you think of the many improvements and about Motorola's commitment to upgrade their handsets?