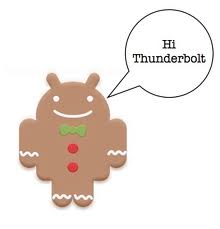 It's not quite an official announcement yet, but an email originating from a HTC Representative confirms that the HTC Thunderbolt will be receiving an update to Android 2.3 (Gingerbread) in the second quarter of 2011.

Droid Life is reporting that a user who emailed HTC customer service about some bluetooth issues got a response back which should thrill Thunderbolt users:

"We are excited to announce that the Thunderbolt will receive the Gingerbread (Android 2.3) update in Q2 2011. Stay tuned for details as we get closer to the update availability."

The Thunderbolt is a powerful new handset, and the first to run on Verizon's 4G network. But it shipped with (the slightly outdated) Android 2.2 (Froyo), while a number of other phones are already running Gingerbread, the latest version of the Android OS.

The rep's email also included a long list of a features and enhancements coming in Gingerbread. This list  doesn't include anything unique to the Thunderbolt, but appears to mirror  the officially announced Android 2.3 Platform Highlights .

Still, Thunderbolt lovers can look forward to getting their Gingerbread, it seems, in the next three months.