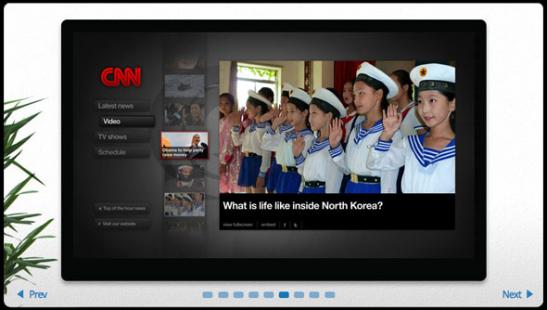 CNN has announced at SXSW that they have made a Google TV app that syncs with other devices to watch live CNN content. You can start watching a story on one device, pause it, open the app on another device and continue where you left off. Netflix currently offers this with any capable device, and its a welcome addition to all things streaming.

Google TV: The Promise and the Problem

Now, Google TV isn't without its share of problems. When it first came out it had some WONDERFUL TV show website integration. You would search "The Simpsons" and it wouldn't only show you what channels it's on and YouTube and search results, but also provide direct links to watch the episodes from the FOX site.

Since television stations are still being run by dinosaurs who fear the internet, they blocked this because they feel somehow they'd be losing money. I guess having a large screen computer monitor or hooking up a PC to your television isn't THE SAME THING in regards to how we see their content. I hope someday they will learn to embrace technology rather than run away from it.

CNN Accepts Google TV, a bunch of other networks to win over

While I'm very happy that CNN is trying to come to terms and work WITH Google TV, there is still a good amount of work to be done. Once Google TV gets Android Market applications this year, the networks will then have to deal with people trying to trick their sites into thinking the site is being viewed on a traditional PC anyway, so they really should just play nice and allow this. It's not like they don't have ads in their videos online, so money is still being made!

Sorry to rant a little but it drives me insane. No specific  date was announced, so it will most likely debut once the Android Market comes to Google TV. Vent out your network frustrations with me in the comments, and let us know if you are interested in a CNN app for Google TV.