A&T Responds to HSUPA Complaint from Better Business Bureau, Says will Enable It in April

We've been following AT&T's upload speed issues for a while, and now they have finally admitted what their customers have complained about for weeks: Yes, AT&T has been limiting upload speeds on their so-called "4G" network.  AT&T's HSPA+ network is indeed delivering faster download speeds for customers with capable devices, such as the HTC Inspire 4G and the Motorola Atrix 4G.  But reports of downright crawling upload speeds were reported by a number of angry customers, and AT&T refused to admit that they were behind the slowdown.

At first Big Blue blamed the respective smartphone manufacturers for not enabling HSUPA, which is the upload component of the HSPA+ protocol.  But a glance at their chipset specs easily demonstrates that the phones were indeed HSUPA-capable, and some Android geeks proved it by changing a few internal settings in rooted phones.  And then reports came out that the iPhone 4 and the iPad 2 managed HSUPA just fine thank you.  That led to the discovery that AT&T had deliberately implemented an old 3GPP (from 2002!) revision that doesn't include HSUPA, for all devices except the iPhone 4 (and the later-released iPad 2).

Did AT&T have some kind of special deal with Apple that required all other phones be crippled?  Because there is no doubt, HSUPA was turned off in the firmware.  We know this because some folks at xda developers found they could turn it on.

AT&T Response to BBB: Yeah We Sucked off Upload Speed, So What?

Here is kgeissler posting on xda developers on AT&T's response to his BBB complaint:

On March 09, 2011, the business provided the following information:

AT&T Mobility (AT&T) received the above-referenced customer complaint and appreciates the opportunity to respond. Specifically, Keith Geissler complains that the recently released Motorola Atrix does not offer speeds anywhere near what advertised speeds claim. He is requesting activation of 4G services and removal of the cap on the Motorola Atrix services.

Account research regarding this complaint shows that AT&T is focused on delivering a wide choice of solutions and the best possible Smartphone experience to our customers. Be assured that AT&T has not "capped" the upload speeds on the ATRIX. The ATRIX is a HSUPA-capable device, and we currently are performing the testing and preparations necessary to ensure that, when we turn this feature on, you will continue to have a world class experience.

We ask that you please keep in mind; software is only one of many factors that can affect speeds experienced. Factors such as location, time of day, network capacity and facilities, can have an impact as well. Again, in order to ensure the best possible customer experience services will become available once testing has been completed.

AT&T sincerely regrets any inconvenience this issue may have caused. Please feel free to contact me directly at 952-703-4316 if you have any additional questions or concerns in this matter.

I hope you noticed the phrase I've emphasized in red: when we turn this feature (HSUPA) on.  No, they haven't "capped" upload speeds, they just failed to enable them!

Now, have a look at this fascinating diagram of framework images, posted in the same xda thread by user mburris.  Among the complaints from AT&T users were that they were getting an "H+" symbol on their phone despite the slow upload speeds.  Here's why! 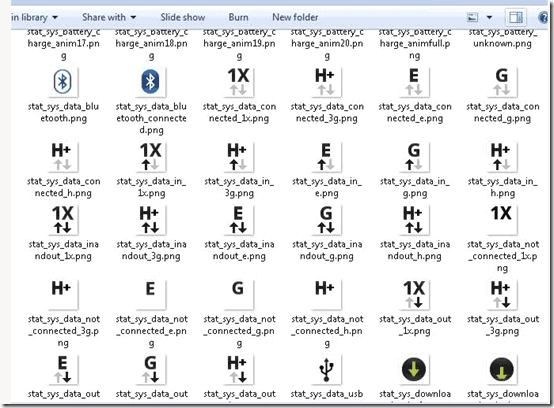 Do you see all those H+'s under different names?  This symbol dump shows you will see H+ whether you are connected on 3G, HSPA, or HSPA+; there is no distinction between the three.  Fascinating, no?

AT&T: Yeah We Were Screwing You Android Lovers, But We'll Screw You Less in April, Really!

So AT&T isn't capping your HSUPA speeds, they merely failed to enable them in the first place.   Then they deliberately conflated device indicators that would tell you whether you are getting actual HSPA+ service or not.

Meanwhile, AT&T responded on their Facebook page that a software update will enable HSUPA in April, and confirmed same to a CNET reporter.  This will be good news to owners of the aforementioned Inspire and Atrix, as well as the upcoming sometime during Q2 Samsung Infuse 4G and the should-be-HSPA+-capable Samsung Captivate.  But bear in mind that a customer service rep on Facebook isn't the same thing as an official announcement, so we'll continue to keep an eye on the AT&T-is-too-capping-HSUPA-on-its-network story.