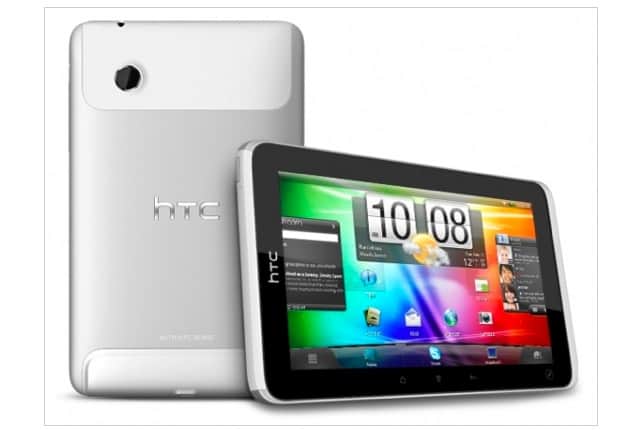 There has been a lot of fantastical stuff coming out of MWC.  Early this morning, we heard that HTC is launching a number of Android 2.3 devices.  We had never heard of Android 2.4 before.  They still call it Gingerbread though.  We speculate that these are Gingerbread devices with some of the APIs of 3.0 Honeycomb.

One of these devices, the HTC Flyer, is a tablet.  It's not just any tablet, it has a special capacitive stylus.  This stylus is so special, it gets its own trademark: HTC Scribe.  This will be a seven-inch tablet, with a 1.5 GHz single core Qualcomm processor.  And it will be running Gingerbread 2.4 (to be upgraded to Honeycomb "soon").  All of these features make it unique in this age of dual core, Honeycomb tablets.  Do these specs make it an entry-level, budget tablet?  Hard to say as there is no word yet on pricing.  One thing we do know is that among the carriers to receive this device is Telus in Canada.

The HTC Flyer will have unibody aluminum styling, a new 3D Sense interface, and HTC's special "Scribe Technology" stylus.   It comes with a 4000 mAh battery, and a resolution of 1024 x 600.  There will also be dual cameras, 1 GB RAM, and 32 GB of on-board storage.

HTC says "people can rediscover the natural act of writing" which allows you to "take notes, sign contracts, draw pictures, or even write on a web page or photo"… then sync them wirelessly to Evernote.

I think it sounds pretty exciting and innovative.  We will let you know when someone has gotten their grubby paws on one.

What do you think?  Is this a game-changer?  Will you wait on that Moto XOOM to see how this one pans out?  Let us know below.

Update:  It seems that the whole Android 2.4 Gingerbread thing was a typo.  All of the devices that HTC announced will be on 2.3.