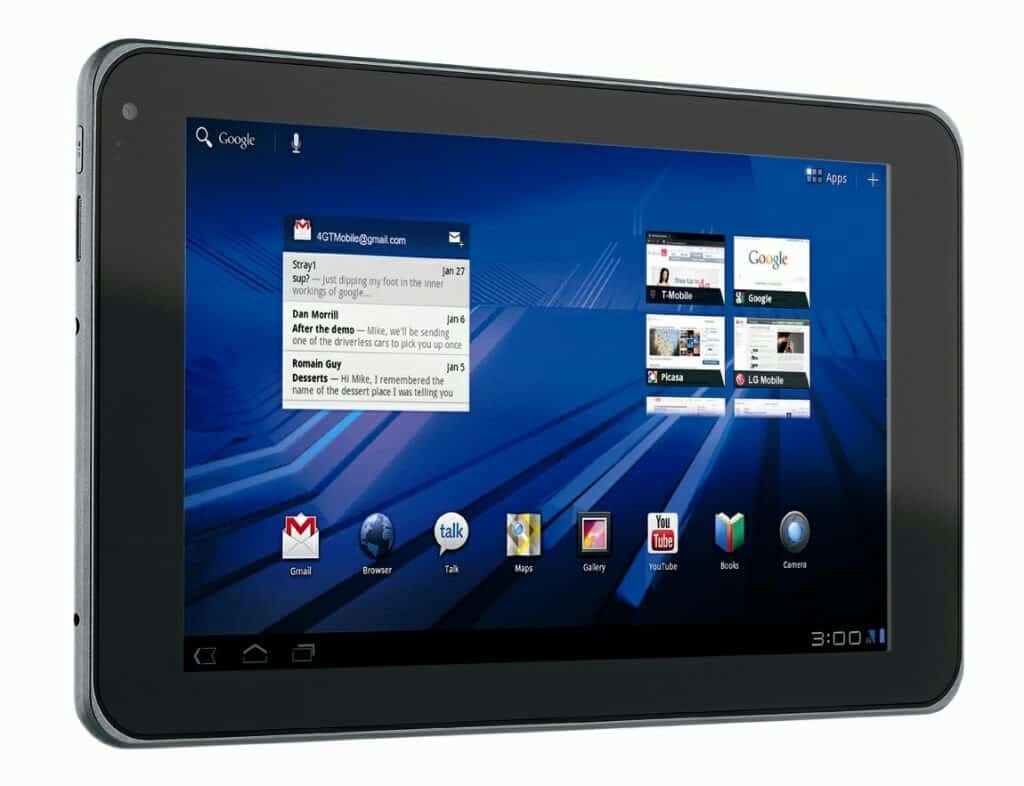 LG's Android tablet, the G-Slate, will be available on T-Mobile as the T-Mobile G-Slate.  The US carrier often brands devices with its name rather than using the manufacturer's mark.

The 3-D capability will require special glasses for the user, but 3-D doesn't just refer to viewing.  The tablet can record in 3-D as well using its 5 megapixel camera.  There's a front-facing camera for video chat, and if you plan on using it you'll be happy to know it's  fully capable of using T-Mobile's HSPA+ network for 4G-like performance.

The G-Slate is an in-between 8.9 inch size, neither emulating the popular Apple iPad's ten inch heft, nor the Samsung Galaxy Tab's seven inch convenience.  The display will be high definition (HD) and multitouch.

No launch date was given, other than a "spring" availability.  Since it is launching with Android OS 3.0 (Honeycomb), perhaps getting the new OS working with the new 3-D features explains the soft dating.

The G-Slate has the same dual core processor as the Motorola XOOM.  If you could have either one, which would you want, and why?

Expected to be available this spring, G-Slate is built for speed on America's Largest 4G Networkâ„¢ and is the first tablet in T-Mobile's
pioneering G-series of devices, which began with the world's first Android-powered smartphone just over two years ago. The first 4G tablet from T-Mobile and LG, the G-Slate is powered by Android 3.0 (Honeycomb), the latest version of Google's Android platform, which is optimized for tablets. In addition, the G-Slate will be among the first tablets to feature 3D capabilities including built-in support for 3D graphics, enabling consumers to capture and share their own 3D videos and experience 3D HD content right on the device with the aid of 3D glasses.

"The G-Slate represents the next chapter in T-Mobile's rich history of Android innovation," said Brad Duea, senior vice president, marketing, T-Mobile USA. "Tablets enable users to take with them the rich Web and entertainment experiences they have at home, and this will radically shift the way people interact with and consume content while mobile. The G-Slate delivers a powerful combination of premium mobile HD entertainment and T-Mobile's lightning-fast 4G mobile broadband network."

"We are excited to introduce the T-Mobile G-Slate by LG, which offers consumers an engaging new way to communicate, entertain and stay connected," said Tim O'Brien, vice president of marketing for LG Mobile Phones. "Bringing consumers the latest in revolutionary HD tablet technology and an Android platform perfectly optimized for tablet use, G-Slate provides a unique multimedia experience."

The sleek, lightweight G-Slate can easily be held upright in one hand for reading an eBook or magazine, watching streaming TV or browsing the Web while on the go. Featuring a rear-facing stereoscopic video recorder with 1080p for HD video capture and a
5 megapixel camera with LED flash, the G-Slate makes it easy to capture moments on video or with a photo. With the front-facing camera, customers can video chat with friends and family over T-Mobile's network or Wi-Fi with Google Talkâ„¢. The G-Slate also supports 720p HD on-device video playback and HDMI output to show 1080p content on 3-D and HD displays. With a NVIDIA Tegra 2 mobile processor with dual-core CPU and full Adobe® Flash® Player support, the G-Slate enables quick and seamless browsing of rich Web content, multitasking and gaming. The G-Slate will also provide a superior entertainment experience when streaming live TV or downloading music and videos with lightning-fast speed over T-Mobile's 4G network.

In addition, the G-Slate includes 32 GB of internal memory and features a built-in gyroscope, accelerometer and adaptive lighting for the latest applications and the ultimate gaming experience.

T-Mobile's 4G network, America's largest 4G network, has expanded into more than 100 major metropolitan areas, reaching more than 200 million people nationwide. Beginning today, T-Mobile's network is also delivering 4G speeds to Albany, Augusta, Columbus and Macon, Ga., and Chattanooga, Tenn., in the South region as well as in Champaign, Ill.; Lansing, Mich.; and Rochester, Minn., in the Midwest. In addition to the expanding its 4G footprint, T-Mobile has aggressive plans to double the speed of its 4G network in 2011. T-Mobile expects that 140 million Americans in 25 major metropolitan areas will have access to these increased 4G speeds by midyear.

Visit the T-Mobile G-Slate product page to register for updates.

Android, Google and Google Talk are trademarks of Google, Inc.

Based in Bellevue, Wash., T-Mobile USA, Inc. is the U.S. wireless operation of Deutsche Telekom AG. By the end of the third quarter of 2010, approximately 130 million mobile customers were served by the mobile communication segments of the Deutsche Telekom group – 33.8 million by T-Mobile USA – all via a common technology platform based on GSM and UMTS, the world's most widely-used digital wireless standards. Today, T-Mobile operates America's largest 4G network, and is delivering a compelling 4G experience across a broad lineup of leading devices in more places than competing 4G services. T-Mobile USA's innovative wireless products and services help empower people to connect to those who matter most. Multiple independent research studies continue to rank T-Mobile USA among the highest in numerous regions throughout the U.S. in wireless customer care and call quality. For more information, please visit http://www.T-Mobile.com.  T-Mobile is a federally registered trademark of Deutsche Telekom AG. For further information on Deutsche Telekom, please visit www.telekom.de/investor-relations.