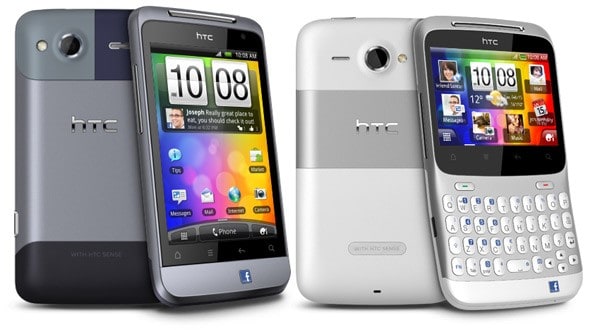 Recently at MWC 2011, HTC showcased their Facebook handsets with a dedicated Facebook key at the front. HTC insists that their handsets, Salsa and ChaCha, are not called "Facebook devices".

HTC Salsa features a 3.4 inch capacitive touchscreen with HVGA (480 x 320) resolution, while HTC ChaCha has a BlackBerry-style QWERTY keyboard in portrait mode. Whatever claims HTC makes overlooks the fact that these devices are built around the successful social network website. Both these devices will be powered by Android OS 2.4, but the Sense UI customizations have some tweaks and options to create a more Facebook-oriented experience. The blue Facebook button at the front features a pulsating light which informs you that the context can be shared through Facebook. If you keep holding the button, it will give you the option to check-in with Facebook Places.

As far as specifications are concerned, both the devices have lot of similarities. They both have a 600 MHz Qualcomm MSM7227 processor which is quite reasonable in terms of performance. HTC Salsa has 512 MB of RAM and ROM, plus a 5 megapixel autofocus camera with LED flash and a front-facing VGA camera. It also sports connectivity with dual band 3G and quad band GSM/GPRS/EDGE.

HTC ChaCha features a 2.6 inch touchscreen with the same HVGA resolution. These handsets are expected to be released globally by end of Q2 2011. Prices are estimated to be above the Wildfire S but less than the new Desire S and Incredible S handsets. As more in-depth information keeps coming in, we will keep you updated.