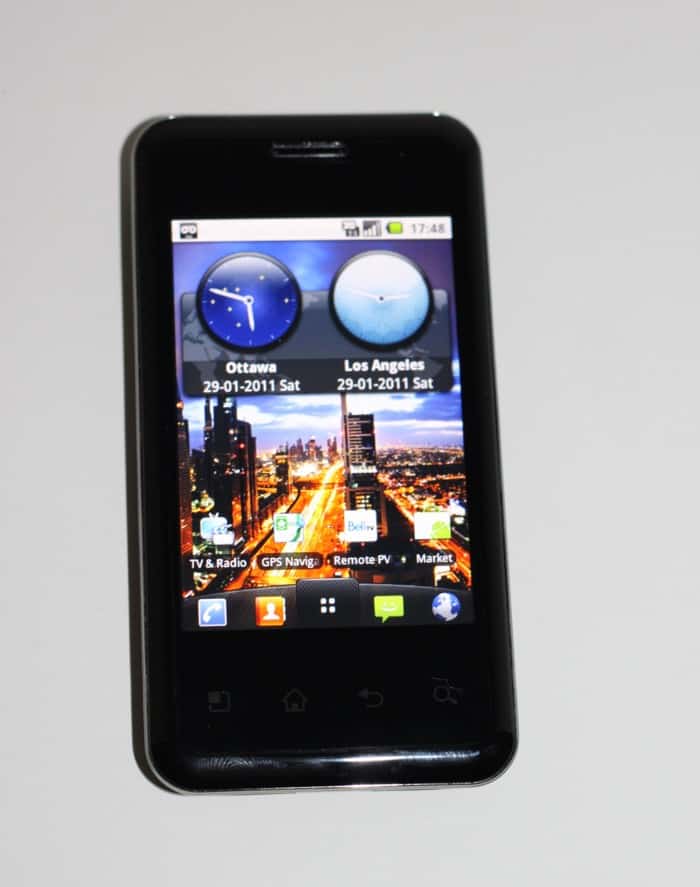 Today we take a look at the LG Optimus Chic E720 android smartphone that was announced in July of 2010 and was recently released by Bell Canada early last month. This phone is part of LG's Optimus line-up of android smartphones that has made a big splash on the market this year.

The LG Optimus Chic is a candy bar styled smart phone that comes in a shiny black piano finish with a very sleek design and with the basic touch functionality buttons located underneath the screen.  This Smartphone it's a bit on the smaller size for those of you that like the more compact designs, its dimensions are 112.5×57.9×12.9mm and it's fairly light at 132 Grams.  Overall, this is a sharp-looking android smartphone that has a simple but sleek design to it.

The LG Optimus Chic comes equipped with a 600 MHz processor which is a little slower than some of the higher end LG android smartphones but when using the phone there's no lag or sign of the phone being underpowered.  The phone has smaller than average internal memory (150MB), but like most android smartphones it is upgradeable through the micro SD, up to 32GB's and it comes with a 2GB memory card included.  The LG Optimus Chic comes with the standard features of GPS, 3G, Bluetooth and microUSB.  This is a smart phone that is sufficiently powered for an entry-level user.

The display is a TFT Capacitive touch screen that is 320x480pixels, 3.2 inches. It has a multi-touch Accelerometer sensor for UI auto-rotate, a proximity sensor for auto turn-off and an Ambient-light sensor.  It is an average size screen that has good quality color display.

The LG Optimus Chic comes with a nice user interface that is very similar to stock android user interface.  Currently, a lot of manufacturers are quoting custom UI's on phones that sometimes do not always benefit the user.  LG has decided to go with this simplistic but user-friendly user interface that accents android.

One great thing the LG Optimus Chic does not come with is the bloat-wear android applications; it only comes with all the necessary /standard applications that you'll find on an android smart phone.  It comes with a good set of android widgets that are user-friendly. One of their widgets and 'weather widget' by LG is very nicely designed and comes with great features and is very popular among the android community.

The keyboard used on this phone it's a standard android touch-key pad which works very well and of course can be replaced by an android application you desire more functionality from the keyboard.

Call quality on this phone is average and will keep users very satisfied.