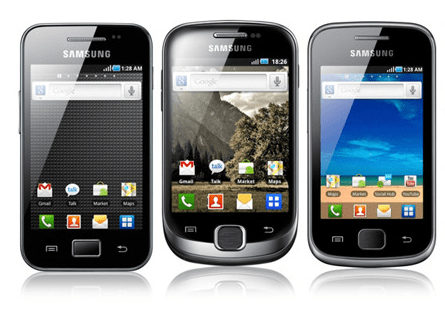 Thanks to MobileBurn, we've got plenty of pictures of the new mid-range to budget-priced Samsung Galaxy phones: the Galaxy Ace, the Galaxy Fit, and the Galaxy Gio (left to right, above).  These were announced in January and now they're available to admire at Mobile World Congress in Barcelona.

All three phones feature Android OS 2.2 (Froyo) plus Samsung's TouchWiz user interface and their Social Hub software.  They all have the same 1350 mAh battery, QVGA video at 15 fps, Bluetooth 2.1, Wi-Fi 802.11 b/g/n, and the QuickType by Swype virtual keyboard.  All include a 3.5 mm audio headset jack and an FM radio.  All have a microSD slot, and all should include a 2 GB microSD card (the spec sheet has a curious little error in it, but GSM Arena says they all have the card included).

All the phones are headed to Russia and then India.  In addition, the Ace and Gio will also launch in China and some of Europe (such as Germany), while the Fit will make its way to South America.

Basically, these phones have a lot more in common than they have differences.  Other than the processor, the display or the camera, the styling is what people may make their choice on.  Pricing should be on the lower side, given all the high-powered phones also being announced every time we turn around.  Check out the Gallery below to see pictures of all three phones.

This device has a 3.5 inch display with resolution of 480 x 320.  The processor is 800 MHz, and it also has a 5 megapixel rear camera.  It will also be known as the Galaxy Cooper in India and is available now.

This handset has a 600 MHz device making it the poky member of this trio, plus the lowest resolution touchscreen display of the three: 320 x 240 in 3.3 inches.  But it still features a 5 megapixel camera.  It should be available in March.