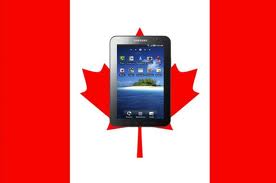 Android seems to be taking over the World. Android has taken  over the States and  I'm surprised Sarah Palin hasn't gone on TV to label it a terrorist organisation. It is also taking over the UK where i am surprised that the British haven't accused it of stealing their jobs or milking the benefit system. Now it seems Canada is next in line for the green army to invade.

The past three years have been a tough one for Android what with RIM and Apple keeping their foot hold on the mobile market but all that is now changing. According to  Brandon Mensinga, senior mobile analyst for IDC Canada, the Android market went form a very poor 6% of market share in the final quarter of 2009 to a massive 26% in the last few months of 2010. Brandon also predicts that by 2012 Android is going to be the leader in the smartphone industry in 2012.

In the UK people like HTC,Samsung and Motorola have backing from all the networks and in the States Verizon Wireless and AT&T are the Android champions. In Canada they didn't have that backing and the home-grown talent of RIM was another factor.  At first it was all about the iPhone with Rogers being the first then after a joint HSPA network launched by Telus and Bell Canada all three have been selling the iPhone for just over a year now and thus there was no real need to offer any competition to it.

In the UK the likes of the HTC Desire range and Samsung's offering s have brought Android to the forefront of the mobile market and that is seeing a very steady increase and the US has big hits such as the Motorola Droid. Thanks to the  Mobile World Congress there will be a bigger selection of handsets with networks rushing to offer their customers the latest in phone technology which just so happens to have Android as the operating system.

In Canada the Android based phone of choice seems to  Samsung, who between the fourth quarter of 2010 saw their smartphone shipments grow by 200% and now account for 34% of all smartphones in Canada. If they want to keep and increase that foothold they will have to separate themselves from the crowd and offer a different range of products for a different  customer base. This is where Android wins, you can find it on a variety of devices aimed at a variety of people and it can be put in price brackets to satisfy different budgets.

What Android device do you own and what will your next one be?