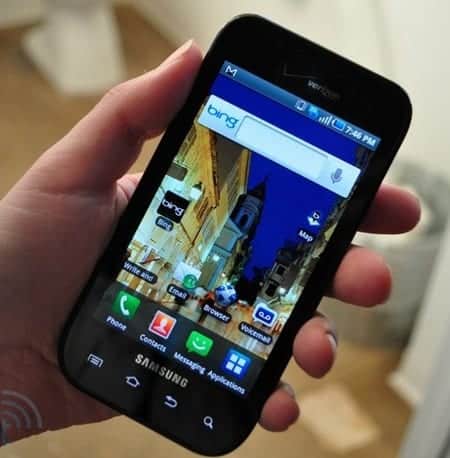 The expected (and hoped for) Froyo (Android 2.2) update for the Samsung Fascinate has turned out to be just a maintenance release (MR) for the existing operating system. Verizon Wireless has released an MR update called DL09 that addresses a number of things.  These include a GPS fix, bug fixes, and updates to the pre-installed apps.

Still no word as to when Froyo will be coming to the Samsung Fascinate.  Of course, we'll let you know that news as soon as we hear it.  Meanwhile, here's Verizon's complete run-down of what DL09 can do for you.

Enhancements:
+ Updated versions of preloaded applications, including V CAST
videos, City ID, VZ Navigator,® and Amazon Kindle.®
Improvements:
+ Ability to change the reminder time and alert tone for
calendar events.
+ Improved the update consistency of the feed and widgets.
+ Music now pauses if you unplug your wired headset or turn
off your Bluetooth® headset.
+ Improved stand-alone GPS performance.
+ Increased security by hiding your 3G Mobile Hotspot password
while typing.
+ Ability to open any PDF attachments sent in an email.
+ Ability to use special characters in corporate email passwords.
+ Enhanced backlight display for the bottom four buttons on
the device to now follow the device display timer setting.
+ Widgets now refresh based on the defined refresh time interval.
+ If already in a locked state, the device will now remain locked
when placed in the desk dock or car dock.

The update will be rolling out to Fascinate owners on Big Red.  If your phone hasn't already received it automatically, you can intiate it yourself by selecting Settings > About phone > System updates > Check New.