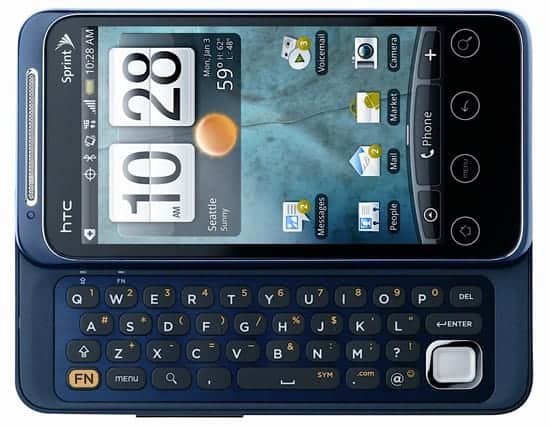 Hey this is the HTC Evo Shift 4G. It is a tad different from what is out there.

More or less an evo with a bit of downgrade, we go from a 1ghz processor to an 800 MHz Qualcomm MSM7630 which is a snapdragon indeed. There are 512 MB of RAM and it shows with speed, you also get 1 GB ROM (358 MB free). Which comes in handy for storing, I got a 2gb sd card with my review unit which of course can be upgrade to 32 gig.

The screen is  a 3.6-inch (diagonal) widescreen which displays at 480-by-800 TFT LCD at 216.97 ppi. The ppi is great, ppi meaning pixels per inch, that is impressive and quite high res. The screen is bright even on half brightness and very clean looking under the glass. I approve heavily of the screen, really liking it.

A 1500 mAh Lithium-ion battery is inside this device giving you a full day of talk or text, I haven't had that many issues with it, it is solid and keeps up with the UI which is pretty demanding. It has the same battery as the original Evo

Android 2.2 with Sense modifications are on this device, so you get the range of 2.2 additions known as Froyo. Flash and the works are available. I have used it before, a few times on my droid and other times on other devices as well.

Sense 2.2. That is right, HTC Sense rides on board with this device and it is very fluid and great to look at, many people I talk to are impressed with the brightness of the screen and the speed of the device, Sense seems to boost any device up a notch.

There is a hard keyboard on this one, and it is a bit weird to get used to unless you have used the epic 4g keyboard. The epic keyboard is very similar to this and is pretty nice, quite wide and pretty nice. It is nice to use and makes typing easy once you get the hang of it.

A 5mp camera that records 720p, seems that is the new standard for now which is something I like, a quality camera that takes photos and great video. The browser is fast but the network in northern Utah seems pretty poor, bad 3G and nearly non existent 4G in the main areas I go. Sorry to say but the data on this one is a deal breaker for me. Strange because the Sprint LG Optimus I had last week worked pretty good with 3G.

The calls were generally good, however the speaker seem a bit quiet in the ear piece, I believe this was the case with the old Evo as well, another big deal for me, I love loud speakers, let me hear and turn it down if I need to.

I do like this phone despite a few minor issues, but they are things that will likely get fixed or if not fixed, just won't matter as much.