For all you guys looking to jump into ownership of an Android tablet T-Mobile throws its hat into the ring with the Dell Streak 7. T-Mobile announced over Twitter that the Streak 7 will be available this Wednesday for $199 (After a $50 mail in rebate) on a 2-year contract.

The Streak 7 will be T-Mo’s first 4G Android tablet and will be running a 1 GHz nVidia Tegra-T20 Dual Core processor on Android 2.2(Froyo). Other features include a 7 inch 800 x 480 multi-touch display, 1.3MP front-facing camera, full Adobe Flash 10.1, and 16 GB internal storage. The memory can be upgraded up to 32 GB with a memory card. The rear camera is 5 MP and sports auto-focus and flash.

The Streak was originally priced at $330 but this drop could be a big step in the right direction for T-MO. The S7 will be running over T-MO’s HSPA 4G networks. I gather from the Dell site that there are going to also release a 3G model of the Streak 7 as well. With the many Android tablets on the horizon T-Mobile has entered a solid contender at a good price point, if you don’t mind a 2 year agreement. The Streak could also be seeing an upgrade to Android 3.0(Honeycomb) sometime in the future. There you have it guys so what do you think about the Streak 7, will it be your choice over the Galaxy Tab and the upcoming Motorola Xoom let us know in the comments. 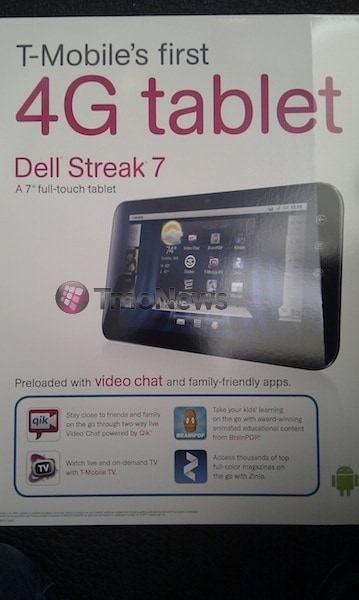