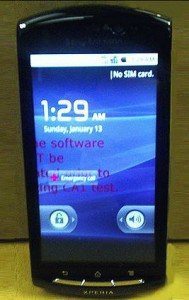 'Hallon' – Sony Ericsson's upcoming smartphone has been thoroughly screened at Mobile-Review. The smartphone is referred to as Vivaz 2 (by reviewer Eldar Murtazin), but Hallon is the rumored name given to the smartphone. The smartphone looks like an improvised version of Vivaz with certain tweaks by throwing Symain out of the window and going in favor of Android 2.3 Gingerbread. Having all this, it still manages to get a positive review and has updated features  such as display to       480 x 854 resolution, and the 1 GHz MSM7630 CPU paired with Adreno 205 graphics.

Hallon also features an 8-megapixel camera with EXMOR R sensor at the back and capable of recording video of  up to 720p resolution which is same as that of Xperia Arc.