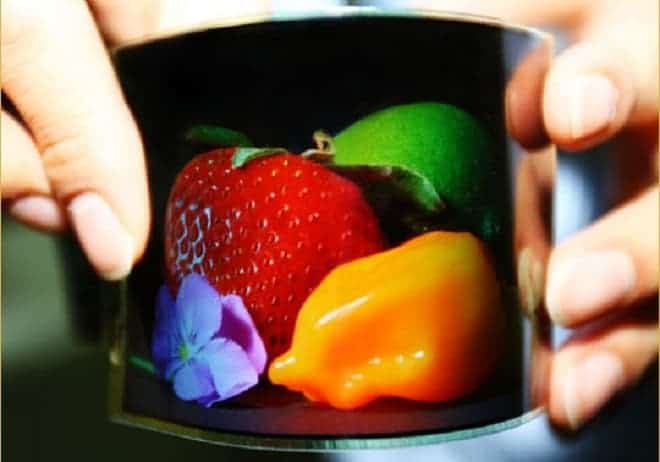 One could easily argue that smartphone innovation has stagnated over the past few years. Sure we’ve gotten faster processors, more internal memory and higher-res screens, but there really hasn’t been anything to make you go, “Wow!”

Samsung intends to change that with a new screen technology set to debut at the upcoming CES – a 4.5-inch flexible AMOLED display.

According to Samsung’s press release, the display is:

…the most advanced flexible AMOLED display. Only 2mm thick, the 4.5 inch flexible AMOLED runs at a WVGA 800 x 480 resolution and can be rolled down to a one centimeter radius.

At WVGA, this new concept prototype offers a display resolution four times that of the previous most flexible AMOLED prototype in the industry, thanks to the use of a new plastic substrate that can withstand the 450-500 degree temperatures required in the manufacturing process.

Typically, flexible displays use plastic substrates instead of glass substrates because this helps the display become lighter and thinner. Furthermore, the new plastic substrates are not prone to breakage during manufacturing. Previously, plastic materials melted at temperatures over 400 degrees during the manufacturing process, making commercialization difficult.

This is pretty exciting as it will likely change the way mobile devices are designed and how they function. It’s important to note, however, that this technology is still in the prototype stage and won’t likely be showing up on any devices for awhile. Still, it does provide for some amazing possibilities.

Source and image via Intomobile