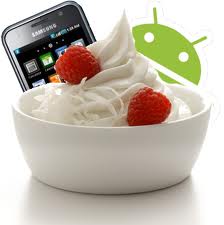 Whew!  Let's see if we can keep all our Samsung Froyo rumors and dish straight.  So far we've had a series of announcements (and even more rumors) from Samsung or their carrier partners about updating the Galaxy S family of smartphones to Android OS 2.2 (Froyo).  The phones were launched this summer with much talk of an OS upgrade "real soon now."  And we've had a series of non-updates of said phones, sometimes with a statement that it's been delayed, "due to the complexity and unique functionality of each Galaxy S device, we are performing additional testing."  Meanwhile, updates were successful for Galaxy S phones in other regions, including Canada.

Last week, a T-Mobile insider said the delay had nothing to do with technical issues, and everything to do with marketing.  Supposedly T-Mobile was told to hold off the update on the Samsung Vibrant, as the Vibrant 4G+ would be released with Froyo.  This led to one unhappy Vibrant owner announcing he was starting a class action suit against both Samsung and T-Mobile.

Each of the major mobile carriers in the United States sells a different variant of the Galaxy S.  AT&T sells the Captivate, Verizon, the Fascinate, Sprint, the Epic 4G, and T-Mobile sells the Vibrant.  In addition, smaller carriers US Cellular sells the Mesmerize and Cellular South, the Showcase (both are essentially the Fascinate).

Okay, got all that?  Now another insider has something to say, and is saying it on xda developers forum.  According to user |OP|, the reason none of the US Galaxy S phones are being updated is a standoff between the US carriers and Samsung.  Most manufacturer-carrier contracts are written stating the manufacturer will supply critical updates for free (safety issues and possible hazards), maintenance updates for a low fee (bug fixes and other issues), and feature updates for a high, per-phone fee (new software features not already implemented).  But Android changed that model.

Instead of the manufacturer writing the phone software and rolling out new features on their new phones, the Android Open Source Project is updating the software and users know of and want the new features.  While Samsung considered new versions of the operating system to be feature updates, HTC, Motorola, and the like treated them as maintenance updates.  In |OP|'s own words:

Now, here's where the politics come in: most U.S. carriers aren't very happy with Samsung's decision to charge for Android updates as feature updates, especially since they are essentially charging for the Android Open Source Project's efforts, and the effort on Samsung's end is rather minimal. As a result of perhaps, corporate collusion, all U.S. carriers have decided to refuse to pay for the Android 2.2 update, in hopes that the devaluation of the Galaxy S line will cause Samsung to drop their fees and give the update to the carriers. The situation has panned out differently in other parts of the world, but this is the situation in the United States.

Some of you might have noticed Verion's [sic] Fascinate updated, but without 2.2 : This is a result of a maintenance agreement Samsung must honor combined with Verizon's unwillingness to pay the update fees.
In short, Android 2.2 is on hold for Galaxy S phones until the U.S. carriers and Samsung reach a consensus. (emphasis ours, not in original post)

Politics, indeed!  With customers angry at the carriers for having bought phones with promised features that still haven't been delivered, and Samsung not making any official comments on the delay, all we have to go on are these occasional leaks.  Oh yeah, and the twitter campaign.

We'll certainly keep you up to date as we follow the continuing saga of Samsung Galaxy S: The Search for Froyo.