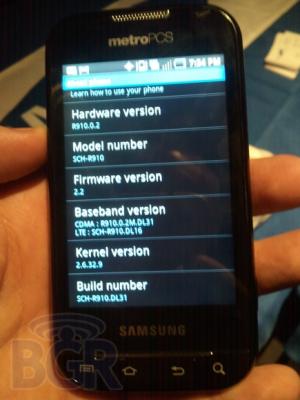 What have we here?  Seems a tipster has sent a pic of a Samsung SCH-R910 that is believed to be Metro PCS’s first Android device with LTE.  4G on MetroPCS!  Running Android 2.2 (Froyo), with a 1 GHz processor, and both CDMA and LTE radios, it sounds a lot like a Samsung Galaxy S.

There will be a 5 megapixel camera and a removable micro-SD slot under the battery door.  We are told TouchWiz is on board as well.  Not much more is known about this phone but it is rumored to be hitting Metro PCS in Q1 with a cool new name.