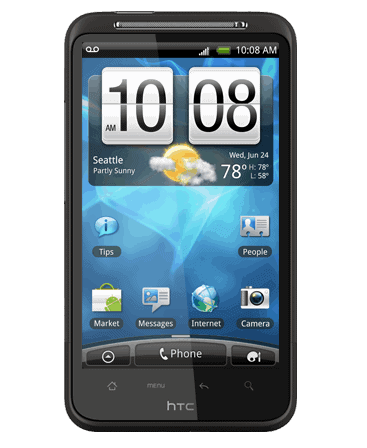 As expected, there is a lot of buzz surrounding 4G technology at this year’s CES, with plenty of phones making their debut.

HTC is definitely a leader when it comes to new, high-speed data networks, and that tradition continues with the announcement of the Inspire 4G for AT&T.

The Inspire will be the first phone in the US to feature HTC’s new Sense UI.

Powered by Android 2.2 (Froyo) the Inspire features a whopping 4.3 inch WVGA display with a 1 GHz Snapdragon engine under the hood. The rear features an 8 megapixel camera with LED flash that’s capable of recording video at 720p HD. Additionally, the Inspire sports two microphones to aid in noise cancellation. Storage capacity includes 4 GB internal with an 8 GB microSD card. While the design of the phone looks like the EVO, the Inspire utilizes a metal alloy uni-body construction for better feel and increased durability.

If there’s a downside to the Inspire, it’s the fact that it will operate on AT&T’s HSPA+ 4G network instead of LTE, which is theoretically the slower of the two. The phone is expected to be released in Q1, but no definitive date or price has been announced.

Stay tuned as the 4G wars heat up.