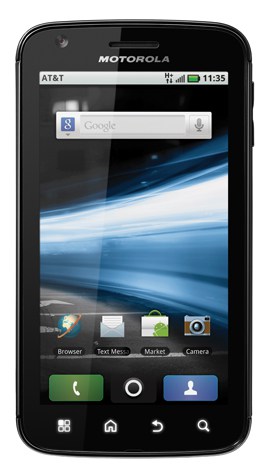 Next to tablets, one of the hot topics at CES is 4G, with both Verizon and AT&T hyping their respective networks. But 4G isn’t worth much if it doesn’t have capable devices to run on it.

Motorola is throwing their hat into AT&T’s 4G ring with the ATRIX. The ATRIX is running Android 2.2 and powered by a dual-core Tegra 2 processor that’s clocked at 1 GHz. Additionally, the phone features a qHD high-def display. As you can see from the image, the phone is rocking a form of Motoblur, which will either delight or anger depending on your UI preference.

Currently there’s no word on pricing or street date, but the ATRIX is expected to hit sometime in the first quarter of 2011.

Not to be outdone by Verizon’s newly-launched LTE network, AT&T promised to deliver 4G with both LTE and HSPA+ technologies in 2011 and they expect to have their 4G network fully implemented by the end of 2013. To meet the demand for 4G speeds, AT&T also stated that they plan to introduce twenty 4G devices by the end of the year with twelve Android-powered phones and two 4G phones in the first quarter.