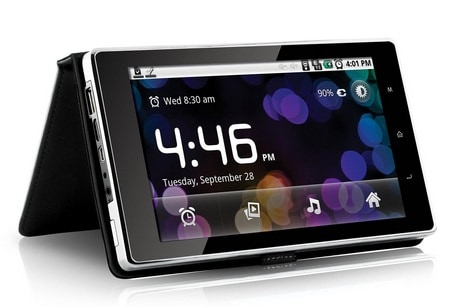 Coby has been preparing for the holiday season by releasing two new Android tablets. Yes, they are powered by Android. Android-powered tablets is nothing new. With Samsung Galaxy Tab, Archos 7 internet tablet, Dell Streak and so on, there is a lot of choices among these tablets to choose.

The company ‘Coby’ has been around in the market since 1991. They are known for manufacturing consumer electronics products. Their latest Android-powered flagship is called ‘Kyros™’ which have two models (MID7005 and MID7015) . Both these devices runs on Android OS 2.1 (Eclair) and features a 7-inch WVGA display (resistive touchscreen), 800 MHz processor (CPU type – ARM1176™ for MID70o5 and Telechips TTC8902 for MID7015), built-in 4 GB internal memory with expandable memory card slot(32 GB for MID7005 and 16 GB for MID7015). Besides these, there is an HDMI-out port  and USB 2.0 port. It also packs networking package but lacks bluetooth feature which seems incomplete for an Android tablet.

According to the Coby website (under internet tablet section), the device seems to offer two unique apps, Aldiko E-Book and AppsLib. The ‘Aldiko E-Book’ allows you to downland and read thousands of e-books (also supports ePub format) whereas ‘AppsLib’ allows you to browse, download and install apps from the ‘AppsLib’ marketplace. Therefore, it looks like it would not be supporting Android Market. Knowing the fact that there are other tablets with more features, this does not sound quite impressive. But for the retail prices ($250 for MID7015 and $299 for MID7005), it looks kind of bargain compared to its competitors.