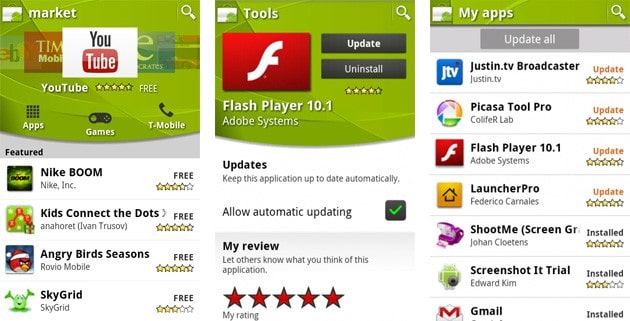 The Android Market is looking to get a face lift.  There are other improvements and tweaks but what the average user will notice is the new UI.  The new app detail page will show more information about the app on one page instead of having to go through several tabs.  A related tab will show other apps that are similar to the app you are looking at.  Live wallpapers and widgets catagories are also added with some others.

Developers will see many improvements too.  The refund window has been reduced to 15 minutes from the old 24 hours.  The reason behind this is most refunds happen in the first few moments and game developers have said that user can buy, complete, and get a refund for their games.  The upload limit has been raised from 25MB to 50MB, hopefully enticing many game developers that have had to find other methods of distribution in the past.

The Market will also be able to target your device by screen size, GL texture compression formats, and screen density.  This update should hit Android devices running Android 1.6 or higher in the next two weeks.

This has been a long time coming and I am happy to see Google giving us a better distribution system for the apps that keep Android striving.  The sudden attention being paid to the Market I believe has a lot to do with sites like GetJar and AppBrain growing in popularity, while the Android Market has been at a standstill.  If you receive the update it will be hard not to notice so drop us a comment and tell us what you think.

source: Android and Me