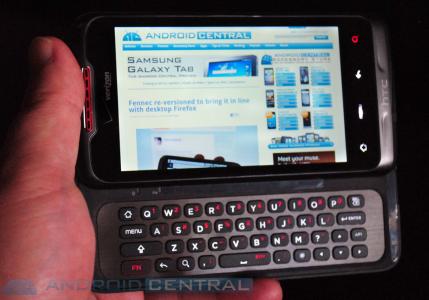 I'm all a-twitter over this rumor, because that's where they're coming from.  A tipster passed this series of tweets over to DroidLife, and I'm happy to pass them right on to you.

If you've been waiting for the HTC Merge (formerly codenamed the Lexikon) to launch at Verizon Wireless, supposedly you're going to have to wait a little more.  It was rumored to hit on November 11th (along with the Motorola DROID 2 Global, DROID Pro, and Citrus), but later rumors quietly dropped the Merge from the Veteran's Day talk. Let's see what tweeter V3RDICT, who says he's a store manager for an indirect retailer, has to say about this world-roaming QWERTY phone's arrival date.

Jeremiah Nelson (V3RDICT) has plenty to share, so we begin with this tweet on why the Merge is delayed:

LTE Radio!  Yeah, Verizon's Long Term Evolution network isn't really 4G but it's going to be better than what Big Red is running now (CDMA with not-quite 3G).  There's more to say on the Merge, and he says it:

@BigTechTony yup. Don't have a release date though. Big Red's gonna have to test it for a bit. #android #HTC #Merge
9 hours ago

@philnickinson thats what this HTC rep said. The Merge was ready to go, passed testing, and VZW decided to pull it for an LTE radio.
9 hours ago

Now he brings up another HTC phone, the Incredible HD, plus why the Merge is so important:

Incredible HD is launching first of the year. HTC Merge is supposed to be the first VZW LTE device. #android #HTC
9 hours ago

VZW is launching an #android HTC device each month of quarter one 2011. Maybe 4 total. #HTC (corrected)
8 hours ago

But no clue yet when we'll see the Merge.  Guess the 11/11 rumor wasn't quite right, though:

HTC Merge launch was originally scheduled for Nov. 23rd. Might still be out this year. #android #HTC
8 hours ago

@Mon5taa yeah, but apparently its been pushed back to add LTE capability, according to @NathanHTC
6 hours ago

We all want to see that LTE.

LTE is gonna be sick.
5 hours ago

So, Merge hopefully in time for the Holidays.  Might not make Black Friday but still could hit before we ring in the New Year.  And once we do… the Incredible HD.  Good times ahead.

Update: Another well-connected tweeter, black_man_x (who appears to have a managerial role in testing Verizon devices), says no talk of delays due to LTE.  Each was willing to yield to the other as having more recent information.  V3RDICT said the delay could also be due to E911 service requirements.  Interestingly enough, this past weekend black_man_x hinted that the Incredible HD would be an LTE device.

Update 2: V3rDICT now says the devices that he demoed today are LTE-ready.  Why the launch is delayed still not clear.  Also, a clarification: The original Merge launch was scheduled for November 16th, pushed back to November 23rd, and as of now, no date scheduled for it yet.  Yes, if you saw this tweet, that is indeed me he's replying to on the dates question.

We'll keep you posted on whatever we can find out on this one.  Please comment if you've got news to share as well.