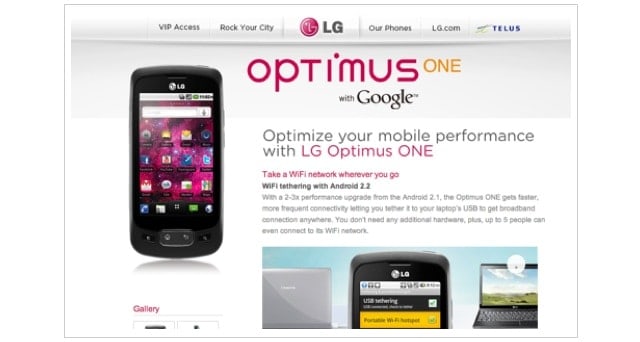 November is a magic month indeed, the launch of gingerbread, announcement of Samsung new phones and now adding to the list is LG Optimus ONE that is going to come to Telus. he LG Optimus ONE has appeared on an LG site with the words "Coming Soon November 2010â€³. Specs on this Android OS 2.2 have it with a 3.2-inch HVGA capacitive touchscreen  (resolution of 320—480), a 600MHz processor, 3 megapixel camera (auto-focus and video capabilities), GPS, Wi-Fii, Bluetooth and holds up to 32GB with a microSD card. No word on price points or an official launch date.