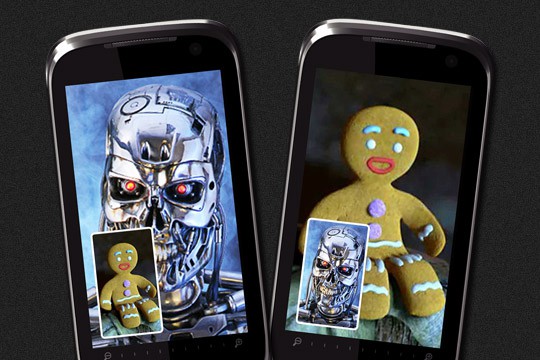 The Gingerbread man appeared on the lawn of the Googleplex, and we have all been waiting (some more patiently then others) for the next iteration of Android, 2.3 Gingerbread to follow suit.

Taylor Wimberly, of Androidandme.com, published a great article about some speculations of what the Gingerbread-flavored future might hold.  Their article is a great read, it is summarized below for your condensed reading pleasure.

We know that Gingerbread is going to be Android 2.3 not 3.0.  Point releases are usually not overhauls of the user interface, but some tweaks here and there are expected.  From the leaked photos of the Nexus S, we know a bit about what the interface will look like.  For example, the notification bar has changed from white to black, and the icons in the notification bar got a makeover.  It is thought that many of the Google apps will receive updates, with styling looking like the newest version of Google Maps (different color menus, different style check boxes, etc.).  There also appears to be new transition animations including one for turning off the screen:

Eric Schmidt, Google's CEO, showed off the Nexus S when he spoke at the Web 2.0 summit a couple of weeks ago.  One of the things he mentioned was the ability to use the phone at special credit card swipe stations in place of your credit card.

Google was working with the designers of the motion-tracking gyroscope found in the Nintendo Wii, InvenSense, to make an even more faithful motion-based experience on Android.  Some phones already have gyroscopes like the Galaxy S line, but "Android 2.3 will add new sensor fusion APIs including quaternions, rotation matrix, linear acceleration and gravity."  Wouldn't it be really cool to control a game by how far your phone is from the ground or that turning your phone like a key would allow you to rotate something on-screen?

Admit it, you are a little jealous of Apple's face time.

In his last interview, Andy Rubin hinted that native video chat was coming to the next version of Android. "We support video chat today, with Google Talk Video. It works on the desktop. Whether that can be repurposed and made appropriate for sipping bandwidth for mobile, it's an exercise that's underway."

It would be really exciting if  "underway" actually means "in testing," or "ready."

Back at the I/O Google developer conference, we were told all about new things that would appear in the next iteration (or next few iterations) in Android Market.  We know that there will be a way to browse apps from the desktop, and have them installed like with Chrome-to-Phone.  There will be YouTube previews available within the Market, so you can know what the app is all about.  There will be Paypal payments and parental control implementations as well.

One of the chief areas where Google has not been able to compete with its competitors is in having a music service.  We know it's coming, and some reports say that it is delayed until next year.  Even if it's not in Gingerbread, it will surely be in Honeycomb.

You may have heard that the Galaxy Tab does not play nicely with all available apps (then again, is there a single Android device that does?).  With many apps, the Tab will blow it up full-screen no problem.  However, with some apps it leaves a huge black border around the app as if the app were opened on a smaller screen device.

This picture shows that there is currently no official support for large screen devices.  Obviously, the Galaxy Tab is not a renegade device as it has Android Market, it's just that the Froyo SDK was not designed with tablets in mind.  This will probably change in Gingerbread, but certainly in Honeycomb.

Have you heard of BlindType?  No?  It is really cool.  BlindType learns how you personally type, to the degree that eventually you can turn off the visual keyboard and just tap the screen where the keys would be, and it will figure out what you were trying to say.  Yea, I know, pretty cool.  Anyway, Google just acquired the company behind blind type, so there may be less whining about the Android stock keyboard in the future.

Google has invested a lot in getting video to play on the web without the need for flash.  The ability to do this is through the wonders of HTML5.  You may have noticed that YouTube now plays many videos in a HTML5 format.  Google is heavily involved with the WebM format, which uses the VP8 codec.  It is an open format and will be incorporated into future Google devices.

There are rumblings that Google will incorporate a live broadcast mode into YouTube, much like Qik and uStream.  It would not be hard to imagine this going a step further into Androidland.  I personally think that if there is video chat, there will probably also be live broadcasting.

"I think gaming is an area that I think is underserved right now. If we were to carefully look at what new features and functionalities in the platform that we would need to support all forms of gaming across the entire spectrum, I think that would probably be an interesting thing to pay attention to."

The days of the Nexus One are gone.  Google has stopped selling the device outright, which can only mean that a replacement is right around the corner.  We have been hearing lots about a potential "Nexus S."  We have seen a lot of leaked pictures, and it's time already!

Here's one on my wishlist: why is there no way to search the calendar?  If I have a doctor's appointment, and I don't remember when, I should be able to type in the doctor's name, and see where it appears in my calendar.

Most of the above changes are likely in the near future even if they don't make it onto the Gingerbread train.  I actually would not be surprised if they skip the Gingerbread point release, and incorporate all this into Honeycomb.  They did miss the original launch date of November 11 because of bad hardware.  If the new Nexus replacement has a dual-core processor (as per the rumors), that is a whole new ball game, and might warrant a big software change as well.  While this has never happened before, the super phone game is still pretty young.

Also, it is not unheard of for companies to release the newest version of a product a year later.  *cough* iPhone *cough* The Nexus One debuted at the beginning of January this year (can you believe it?!), so we might see another January launch.

Finally, what if Andy Rubin does actually announce Gingerbread on December 6, but it is just a quiet launch.  It would be something like, "Look at these things the Android team has been working on.  These fixes and tweaks are now available on AOSP.  There will be a much more substantial release soon."

Enough with the speculation.  All I know is that I am craving some Gingerbread!