Wildfire Lowdown
There have been some interesting developments, this side of the pond, this week regarding the HTC Wildfire.

Firstly, T-Mobile UK announced an OTA update for their Wildfire customers, although sadly this is not the 2.2 update that they may have been hoping for, rather a more stable version of 2.1. Judging by some of the comments I've read here, that sounds good. Good enough though? Well you tell us.

If you are not with T-Mo but fancy a Wildfire nevertheless, Vodafone a knocking out a PAYG version for just £140 ($250). Sounds rather good until you take a closer look at the prices. 50p (90c) a day is not bad for internet access – if you use it a lot but 10p (18c) a text! Come on! Who doesn't send around a hundred texts an hour these days?

Flipping great
I firmly predict that despite its odd looks, the Motorola Flipout will be a big hit, with the youngsters, I suspect as it has wonderful social network capacities baked right into it. Orange UK, who are really catching on at last to Android, are offering it for £170 ($300) PAYG or £22.50 ($40) on a contract.

Japanese Desire for Froyo
Names like Desire make headline writing easy (if a little bit predictable) for us online hacks. In Japan however, the HTC Desire is known as the X06HT II. Snappy huh? Other than that, in terms of updates, there is little difference between the Japanese, European and the North American version as they are all receiving the Froyo (Android 2.2) update OTA (over the air) almost simultaneously, with Japan being the last by just a day or two. this being down to the extra language capabilities required there. 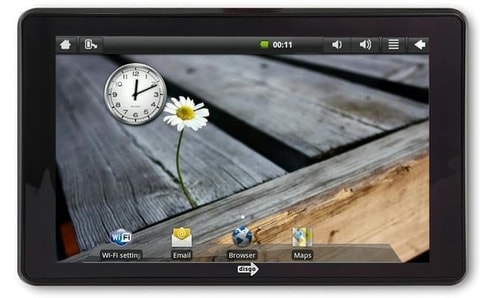 DisGo Tablet
Sounds like an illegal pill to me but not to Irish tech company DisGo, who have brought out the DisGo Tablet 6000 (pictured above) which is a 7 inch Android 2.1 slate with a tidy 800 by 480 px capacitive touch screen, a 1 gig processor and a not unreasonable 2 gig of internal memory. With a price that competitively matches the specs of £180 ($325) I can see this doing very well indeed. Despite the name.