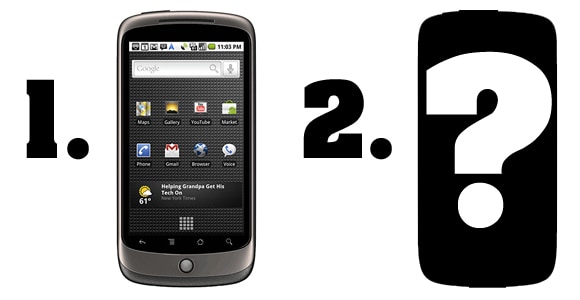 According to City AM, the next generation of Google's own branded phone will appear before Christmas in UK, released as an exclusive deal at Carphone Warehouse. Google's failed attempt with their own site for Nexus One has taught them a valuable lesson: you can't sell phones online as well as in retail stores – at least not yet. This is why they are going to try selling it through a retailer.

Nexus One was the first Android phone to feature a 1 Ghz CPU, which helped push the smartphone market adopt the new 1 Ghz CPU as a standard for all high-end phones. I expect the follow-up to Nexus One will be the first phone will a dual core 1 Ghz chip and great graphics performance.

Since Nvidia has had such a good relationship with Google lately, I'm almost certain it will contain a Tegra 2 chip. Samsung, LG, Motorola and even HTC have already hinted that they'll use Tegra 2 chips in their phones, and if Google will support it, too, Tegra 2 will become the standard chip not only for tablets, but also for phones, in 2011.

And this isn't happening by accident either. Tegra 2 will not only be the first dual core chip on the market, but also the best one. It's going to be the only dual core chip with a "power island" core that manages all the other cores for energy consumption. Plus, it's made at a 40 nm manufacturing process, while OMAP 4 and the dual core Snapdragon will be made at 45 nm, which means Tegra 2 will have another energy efficiency boost compared to the rest.

The graphics in Tegra 2 should also be the best in the market for at least half a year (quite a lot in smartphone time nowadays). We already know it's going to support amazing Unreal 3 graphics, but it will also power 720p HD display resolutions. Also, let's not forget Android will soon be hardware accelerated, and Tegra 2 should be perfect for that.

Nvidia doesn't do only great graphics chips. they also make it so developers can easily optimize their apps and games for their chips, so expect to see some amazin games made for the Tegra 2 platform.

Last, but not least, Tegra 2 will accelerate the Flash player, which should remove any performance issues it might had so far on the weak Adreno GPU's in HTC's phones. Soon, after Chrome gets full hardware acceleration, we should expect it in the mobile browser in Android, too. That, coupled with the dual core Cortex A9 in Tegra 2, it should make the mobile browser render pages with close to rendering speeds on a laptop.

In 2011 we will see amazing apps for Android, and Tegra 2 will be a big part of that.