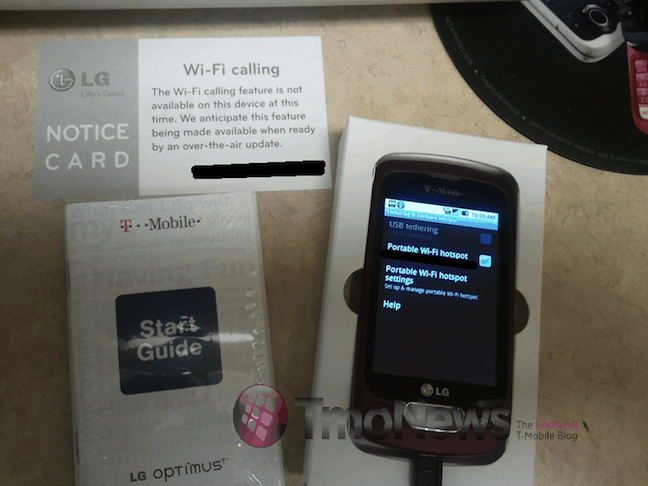 LG's Optimus T is launching fairly soon at T-Mobile.  How can we tell?  The demos are starting to arrive.

TmoNews says the Demo Ts don't have that WiFi Calling option everyone has been talking about.  Given that this is a sweet feature to be found on a mid-budget Android phone, it's a little bit disappointing the demonstration models aren't showing that off to the fullest.  Or rather, at all.  Does this mean the phones won't have the feature at launch?  Let's hope there's an over the air (OTA) update coming really soon.

Another nice feature not found on some of T-Mobile's pricier and more goody-packed smartphones is the option for hotspot tethering.  Yes, the Big T is supposed to have that one as well.

So here's an interesting little rumored item.  Have you heard about the LG Thunder, a mid-range Android OS 2.1 device with full touchscreen, supposedly arriving at five major US carriers?  Red, Blue, Magenta or Orange, plus whatever color MetroPCS is branding themselves with (Navy?), they're all supposedly going to get Thunder.  But this initial report, and the subsequent follow-ups on it were from August.

TmoNews, in this same Optimus T article, reveals that accessories for the LG Thunder are on the way.  That's not the controversial part of the article though.  Right before that paragraph, there's a single sentence announcing that the LG Thunder and the LG Optimus T are the exact same phone.  I'm not buying that, though, and I'll explain why.

Their article doesn't explain how they know the phones are the same, or even that it had it passed along by a tipster.  Clearly TmoNews has sources inside and partnered with T-Mobile, but there's been very little about the LG Thunder in the Android or cellular press recently.  And we'd expect some name changes on that code name, what with Dell having a similarly named offering and all the other big carriers supposedly releasing it.

It looks to me like somebody updated the piece accidentally (the article is marked "Updated.")  The claim that the phones are the same occurs before the commentary about the Thunder and accessories.  The top of the article was talking about the Optimus T.  Then there's the entry "aaaaa" under a photo.   TmoNews is a reliable site, but this is not the the rumor I'm going to put out there with a "yeah, what they said."

Let's bear in mind that the original Thunder leak came out on August 20th via Boy Genius Report, and about a month later LG's CEO resigned.  Then their Optimus Pad tablet device was canceled, due to waiting on the new tablet-friendly Android OS release. LG was already cutting the number of phones they offered, although in doing so they are adopting more, not less Android.  My point is that things aren't as stable at LG as they had been, and perhaps other projects have disappeared.

I'll throw one more spanner into the rumor works: the Optimus T was clearly announced as shipping with Froyo (Android OS 2.2).  So this isn't matching some of the Thunder rumors (2.1 device!) right out of the box.

While the rumors sort out let's gaze fondly upon that Optimus T with WiFi Calling.  Unlicensed Mobile Access (UMA), here we come!