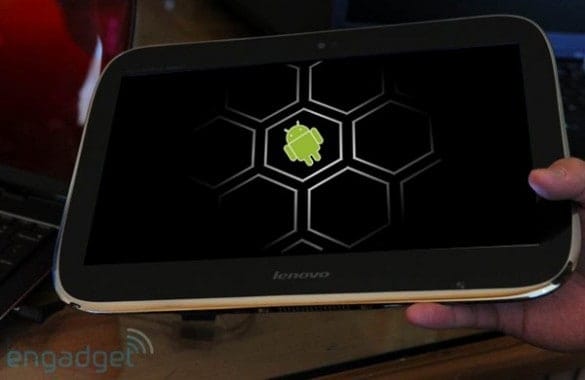 Lenovo says that they are not going to make a Gingerbread tablet, and instead they are going to wait for Honeycomb to be released before they make an Android tablet. Oh, and you can forget about seeing a Windows 7 tablet from them anymore. Here's what Lenovo exec has to say about it:

"The challenge with Windows 7 is that it's based on the same paradigm as 1985–it's really an interface that's optimized for a mouse and keyboard. It has to be optimized for touch. How do you do that?"

Google has said that Android 2.2 Froyo is not optimized for tablets, which was quite obvious in the first place. When Google made Froyo they weren't focusing on tablets at all, so of course Froyo wasn't ready for tablets.

When there's a big difference in the size or form factor of a device, you are going to need an OS that is specifically designed for that type of product. This is exatly why Windows 7 is so inadequate for tablets. It was meant for a device with a physical keyboard and mouse, and it's not going to work for tablets until they make an UI for it that is fully optimized for a touchscreen.

Of course, even if the OS is optimized for a tablet, it doesn't change the fact that all Windows software has also been created for mouse and keyboard, and all apps for Windows will have to be redesigned for tablets. If that happens, then Windows, for the first time in decades, will be playing catchup with all the other tablet OS's like iOS, Android, WebOS, Meego and even RIM's QNX OS for tablets.

That would be a shame, but I was afraid this might happen, since 6 months is really a pretty small timeframe for a new employee to figure out the "future UI of Android". It must've been hard enough to make a new UI for the phones in time for the upcoming Gingerbread event, let alone have time to optimize it for tablets, as well. At least, I hope Gingerbread will be amazing for smartphones.