The iPhone has been showing up as a home control unit for some time.  Now, it’s Android’s turn.

Blake Krikorian, better known as the founder of Sling Media, decided to do the same thing with Android when he began remodeling his own house.  He developed an Android app for the Crestron home control system he had already installed.  Krikorian called his app R2 and will be demonstrating it at CEDIA Expo at the Crestron booth.  He told CEPro about his project in an exclusive interview.

Krikorian’s house was already full of iOS devices to control security, audio and video, lighting, window shades, and thermostats, using Crestron controllers and their iOS app called Mobile Pro.  But Krikorian is a natural tinkerer, and he got frustrated by having to always slide-to-unlock the iPad.  iOS was limiting their potential, in his opinion, as home controller devices.

A controller should always be in “supervisory” mode, ready to use, and ready to respond to expected interruptions such as a doorbell or a security sensor alert.  In those cases, the screen should light up immediately with camera feeds. That means the app should be running in background all the time, easily done with Android OS.

Secondly, Android has true multitasking, while Krikorian feels iOS 4.1 is “limited at best.”  He explained, “In most cases, you basically have to close one app to get to the control app. And then you have to close down that app to launch another. The additional friction caused by those unnecessary steps detracts from the convenience I am trying to provide.”

So it’s easy to use the home controller app while not having to close other tasks down on an Android device.  The camera feed might pop-up an image atop your web browsing, but you aren’t going to lose your place.  Plus, Android widgets easily allow the most commonly used controls to be reachable whenever you need them.

Yes, this is standard for a specialized home control device, but a phone or tablet is an off-the-shelf item.  And clearly Krikorian was finding some of iOS working against his needs in his home control project.  He appreciates the openness of the Android source code to developers, and his friendship with Android founder Andy Rubin didn’t discourage his interest. 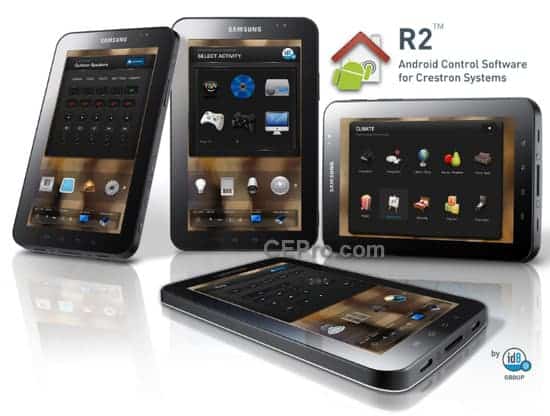 Krikorian arranged for several not-yet-released Samsung Galaxy Tabs to meet him at CEDIA Expo in Atlanta.  Along with the R2 app on a five inch Dell Streak, R2 will be demoed at the Crestron booth.   Crestron already has an iOS app for its controllers, and believes R2 is the first Android app for their system.  Crestron dealers would program the controllers using existing development tools such as VTPro, System Builder, or SIMPL.  These tools would generate the buyer’s custom app for either iOS or Android.

Pricing would be similar to the Apple-based Mobile Pro, at $99 per mobile device.  Mobile Pro also has a free version with less functionality, which could also be implemented on Android devices.

Krikorian’s id8 group, which also where he founded Sling Media, has R2 to consider now.  What started as a home remodel and controller redesign could result in a product.  Krikorian concludes, “While I initially built this app for myself, I found that it is just too cool not to share with others.”

Here’s a video showing how R2 works on both a seven inch Samsung Galaxy Tab and on a smaller Dell Streak.  This was made as Krikorian was preparing for CEDIA Expo.  He briefly mentions at the end that the apps are also working on HTC’s EVO 4G.

Krikorian isn’t the only one moving in with Android. Johnny Mota, CEO of Vsys Automation, is having developer CommandFusion design an Android app to control Crestron home automation systems.  The app is in beta and Mota says many people home automation resellers and users have been asking for it. 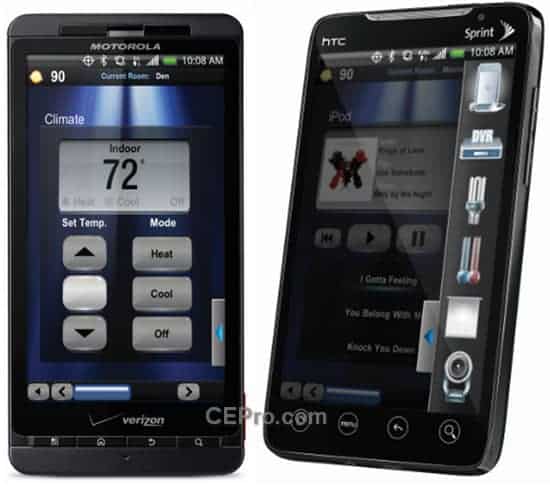 It looks as though the Android OS will allow us to address many of the limitations that the Apple OS has imposed on us. We will now have the ability to design the devices home screen, wake the touchscreen when someone is at the door, and so on. I can’t see this additional competition between Apple and Google as having anything but a positive benefit on the industry, giving us more choices and options.

And it doesn’t stop there.  More home automators have Android front-ends in the works: 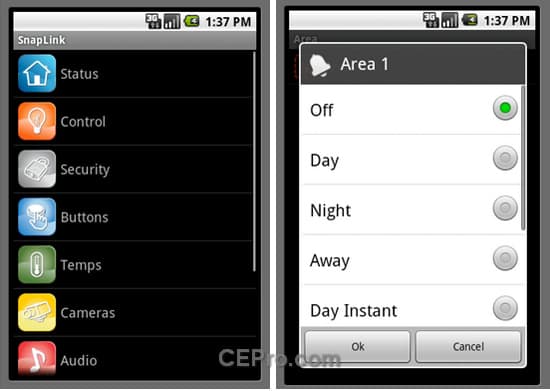 Others in the industry, while not disclosing immediate plans for Android implementation, are clearly considering it.  Android’s market acceptance was mentioned by several, as well as the coming of Google TV.  Couch potatoes everywhere will rejoice in closing the curtains without having to get out of the recliner.