Qu©bec has a new wireless carrier, but it’s not new to the telecomm world.  Videotron, a subsidiary of Quebecor Media, has already established itself in cable services (television, telephony, and internet), and interactive multimedia. 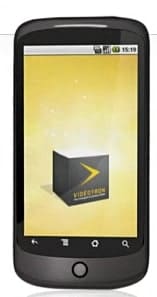 The new wireless venture launches with 12 different wireless phones to choose from.  Yes, they have two Android phones.  Would you believe one of them is the Google Nexus One (right)?  Recently discontinued by Google as a consumer product, Videotron is now the only carrier in North America to offer the Nexus One.

The N1 will not only run Android OS 2.2 (Froyo), Videotron claims this is the first smartphone in Canada to feature Froyo.  Interesting that the called-out features of the phone don’t include that 1 GHz Snapdragon processor.  You have to go to the Nexus One detail page to learn about that.  The N1 will retail for $99.95 with a contract and $479.95 with no obligation.

Both these smartphones have a 3.7 inch touchscreen.

The nuvifone A50 (which is the first Garmin phone offered in Canada) is also a “full-featured” Android device, but the operating system was not specified.  Being from Garmin, it’s heavy on the GPS capability.  The A50 retails for $129.95 with a contract and $459.95 without.

The other 9 handsets offered are not Android devices.  See Videotron’s full lineup here.

Videotron is beginning 3G+ service with internet download speed up to 21 mbps.  HSPDA+ will be rolled out later, with 4G-like speeds up to 42 mpbs.  Service began immediately for Montreal and Qu©bec City, and some areas in between.  In October service will begin to Sherbrooke, Mauricie, Saint-Hyacinthe and Beloeil and surrounding areas, and by year’s end Mont-Tremblant, Drummondville and Victoriaville will be added.  Videotron expects to cover most of Qu©bec’s population by 2011.

“We want to offer our service to as many Quebecers as possible and we expect to be able to serve almost our entire potential customer base by 2011, including the Saguenay / Lac St-Jean region at the beginning of the year and Gatineau / Ottawa in the spring,” said Robert D©patie. “I urge people to find out about our service plans before renewing their agreement with their current carrier.  They won’t regret it!”  D©patie is President and CEO of Videotron.