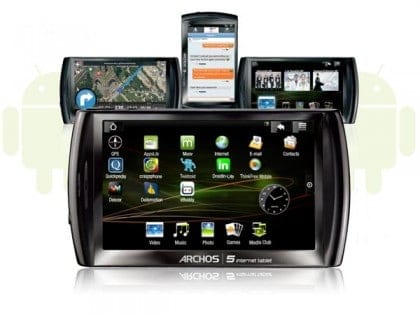 Archos weren't short of new internet tablets for IFA 2010, though it's their Archos 70 and Archos 101 are definitly two that stood out from the buncht.  Measuring in at 7- and 10-inches respectively, the two Android slates (running 2.1 right now, but set to launch with 2.2 Froyo) are certainly thin and reasonable feature-packed, each toting a 1GHz ARM Cortex A8 processor, 3D OpenGL ES 2.0 graphics accelerator and WiFi b/g/n. Both devices use capacitive touchscreens – 800 x 480 resolution on the Archos 70, 1024 x 600 on the Archos 101 – with multitouch and have HDMI outputs for acquiring 720p video out to your HDTV. Archos really provides plenty of codec support too, including AVI, MP4, MKV, MOV, WMV, MPG, PS, TS, VOB, FLV, RM, RMVB, ASF and 3GP.

The Archos 101 is an interesting beast; at 12mm thick, it's very flat and, at 480 grams and surprising light. Archos demonstrated a number of games on the device and the CPU could certainly keep users using the accelerometer to navigate in racing titles. As for the Archos 70, that's a more pocketable model, measuring in at 201 x 114 x 10/14 mm; the 250GB hard-drive unit is thicker than the 8GB flash version. That makes it longer but narrower than the Galaxy Tab, with the Samsung slate slotting in-between in terms of thickness.  The touchscreen felt more responsive than that of the Archos 101, though things like webpage rendering and pinch-zooming weren't as slick as on the Samsung.  The Archos 70 lacks the two-stage kickstand, too, only having a single arm for video viewing.  Unfortunately, there's no rear camera on either model, only the VGA webcam. Archos has decided to abandon the multimedia docks of previous models and there's no DVR dock option for it either. Given the pre-production hardware and non-Froyo software hopefully the Archos 101 or the Archos 70 will make improvements before the production begins. Although one thing that can be said; the price tags for each slate are encouraging.  The Archos 101 expects to retail for $299.99 when it lands midway through next month, while the Archos 70 will be $274.99.  Will you be picking one up?

Here are a sleuth of Pictures to get a closer look at the tablet.