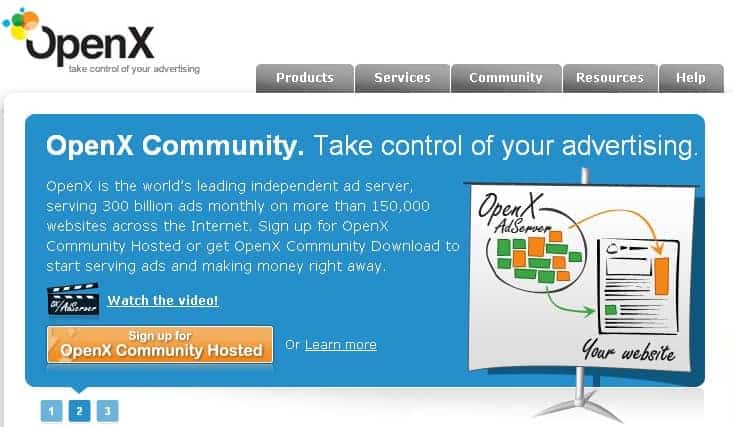 Think search, and you probably think "Google."  And along with their dominance in search engine use comes their ownership of the search-advertising market.

But there's another online advertising market that Google doesn't dominate, and a Los Angeles-based startup, OpenX Technologies, is determined to have a piece of it.  There's far more competition in the display advertising market.  Display ads are larger ads with pictures, as opposed to the text-based ads Google provides based on a search string.

OpenX's plan is to move into display-advertising exchanges, and they've raised $31 million in venture funding so far.  Exchanges are auctions, conducted in real time, for buying or selling advertisement space online.  That includes banner ads on web pages and television-style commercials placed before online video.

Thus far OpenX has partnered with a Japanese advertising agency to start up an exchange and connect with online publishers.  Previously they had signed a deal with Orange, French Telecom's mobile division.  OpenX's website claims they serve over 200,000 websites in 100 countries, serving up 350 billion ads a month.  They achieve this by working with over 80,000 publishers.

Their two products, OpenX Market and OpenX Exchange allow publishers to sell to advertisers in real-time ad auctions, and to optimize revenue while cutting costs.  Advertisers would buy access to large pools of websites, with different grades of ads in the mix.  Guaranteed ads would cost more to place than non-guaranteed, for example.

Google admits they are behind in display advertising compared to Yahoo and Microsoft,  with all three operating an advertising exchange.  Yahoo has Right Media ("the first and largest"), Microsoft acquired AdECN, and Google launched DoubleClick Ad Exchange.  One reason Google fell behind was their concerns about user privacy, which led to other companies pushing ahead with behavioral (focusing on customer types) rather than contextual (focusing on web page content) targeting.  Their purchase of DoubleClick helped them become a player in the display-advertising realm.

OpenX's CEO, Tim Cadogan, noted their entry was an independent exchange, and not tied to either a search or context-based advertising business, nor a publisher.  According to eMarketer, the online display advertising sector is expected to grow from $8.56 billion this year to $14.71 billion by 2014.

As an aside, The Wall Street Journal recently had a multi-part feature covering advertisers spying on website visitors.  Part of the focus was the rise of data exchanges, which have grown tremendously within the past 18 months.  Website owners were unaware of the technology the ads used to track site viewers.  Data exchanges are separate from ad exchanges, although advertisers would participate in both.  The ad exchange enables them to buy a pool of ads on many sites, while the data exchange finely targets the exact kind of customers they seek.

Cadogan summed up OpenX's plans for succeeding in the display advertising market.  "What we're trying to do here is build a global alliance, to build an exchange platform that's a real alternative.  The search marketplace and contextual marketplace are both pretty well tied up by the same player, the display market is not."