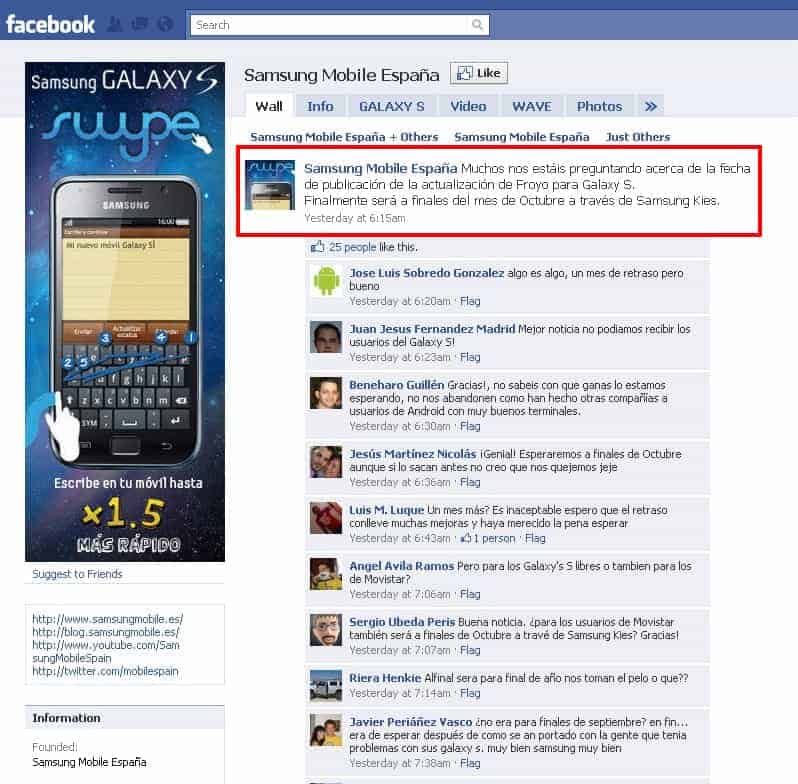 File this one under "Competing Rumors."

Despite the rumor going out that the Samsung Galaxy S smartphone (including all its US variants) will get an update to Android OS 2.2 (Froyo) this Thursday, now there's a new one that says otherwise.  And there's always the possibility that the rollout will differ by country, so it could turn out everyone is correct.

Above is the Facebook page for Samsung Mobile Espa±a.  The comment from Samsung in the red rectangle says

For those of you who would like that in English, Google Translate (and a little bit of rewrite) comes up with:

Many of us are wondering about the date of publication of the Froyo Update for Galaxy S.
Finally it will be in late October through Samsung Kies.

Samsung Kies, if you didn't know, is a desktop sync application for the Galaxy S for your contacts, calendars, media, text messages and software updates.  It seems Samsung isn't pushing it for the US line of Galaxy S phones.

The September 23rd Froyo rumor originated with a Samsung rep in Finland.

There are two possibilities for the competing rumors.  It could be Spain will roll out the new operating system later than other places, or it could be that Thursday was the planned rollout target but problems arose, and the date has been pushed back.

This new date has been bouncing around the Android Blogosphere, and the first place to have it was OLED-display.net.  I'm sure we'll be hearing from Galaxy S owners if they find Froyo on their phones Thursday.