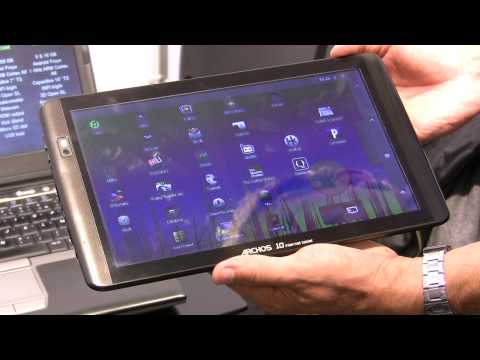 I couldn't make it out to IFA this year, but a few people who did were seriously impressed with the Archos 101 tablet.  Yes, the big one.

Everyone is going gag over the new Samsung Tab, and it's only seven inches!  The Archos isn't as flashy but it will give you a big display for a reasonable price ($299 for the 8 GB version).

Archos makes their Android tablets in other sizes besides 10.1 inches (although that should be the one you want.)  But you also have your choice of 7.0, 4.3, 3.2, and 2.8 inches (although how something smaller than most Android phones would qualify as a tablet is a little beyond me). It's more of a PMP.

The tablets at IFA are still running Android OS 2.1 (Eclair), but Archos says the next release, Android OS 2.2 (Froyo), is coming along and should be on the tablets when they launch in October.  Plus they have announced Flash 10.1 will be running on it, since they've partnered with Adobe to make it work.  All the tablets have the CPU power to handle Flash, with different clock speeds running on ARM Cortex CPUs.  The 10 has the 1 GHz version.

The Android you get should be mostly stock, but one downside: no Google apps and no Android Market.  Google won't certify these tablets because they're missing required hardware such as the GPS and cellular radio.  So along with a few Archos widgets and their version of the missing Google apps, you'll get a link to the AppsLib market instead.

3. The Price and The Wait

The Galaxy Tab may be coming in at $600; Samsung has been coy about the retail pricing.  The most expensive Archos tablet will cost $349.  You'll be able to pick them up at Best Buy, supposedly by October 15th for the 10.1 inch model.

You don't need to sign any contracts with a wireless carrier when you buy an Archos tablet, because they don't have cellular radios.  This is WiFi only (b/g/n).  You're buying a device and that's that.  You already have a decent smartphone, right?  Tether your tablet to your phone and there's your WiFi.

The two largest tablets (the 7 and 10.1 inchers) can connect to other devices.  You've got HDMI for video out (and not some mini version), you've got a USB host port (A) to connect peripherals such as a keyboard or mouse, Bluetooth 2.1 EDR can also run a keyboard, and of course the microSD slot to store more music, video, and pictures.

Here's a hands-on video of the Archos 101 tablet that Taylor Wimberly put together with Will from IntoMobile:

If you want something big to browse the internet, don't want to bust your budget, and don't need a cell connection, this might be the tablet for you.  Just don't be too picky about which apps you have to have.