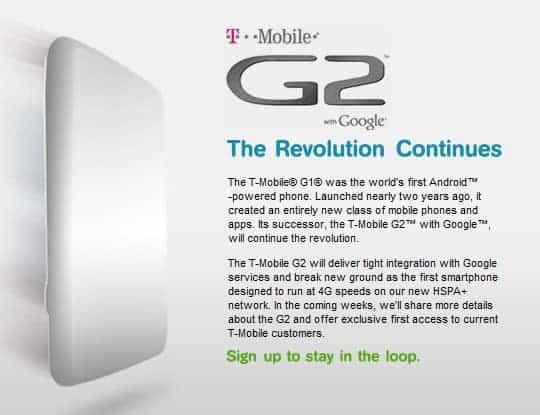 After long awaiting  and speculating T-Mobile has finally affirms all the rumors and talk about the G2 by sending a short press release to the media and updating their HSPA+ handset teaser site. Now details about the G2 with Google are still in the wild but it is more than we had before.  A couple things we can infer about this device as being a successor to the G1 is that it will be a Google experience phone implying it will host a stock version of Android 2.2. Another thing we can expect from this device is that it will be manufactured by HTC. Maybe we can see this device at the upcoming press conference September 15th.

It is said that the device will house a Qualcomm MSM7230, which is sort of like a budget Snapdragon targeted at the mainstream audience. The MSM7230 has the same Scorpion CPU as previously commercialized in the Snapdragon QSD8x50 chipset found in other HTC phones and it has a clock speed of 800 MHz to 1 GHz. Being that Android 3.0 Gingerbread will require at least a 1GHz processor we can predict the G2 will have at least that. T-Mobile's HSPA+ network supports speeds up to 21 Mbps, this device has a theoretical peak capability of 14.4 Mbps. Future handsets should eventually support 21 Mbps, but we believe the first couple of launches will be set at 14.4 Mbps (which is still faster than any competing Android phone). T-Mobile's HSPA+ network will deliver 4G-like speeds to 185 million people this year and you can check coverage in your local area by visiting T-Mobile's site.

If you want to stay in the loop, make sure to visit the teaser site and sign up for future e-mail alerts. Current T-Mobile customers can get exclusive first access, so go register now if you need to upgrade that aging G1. 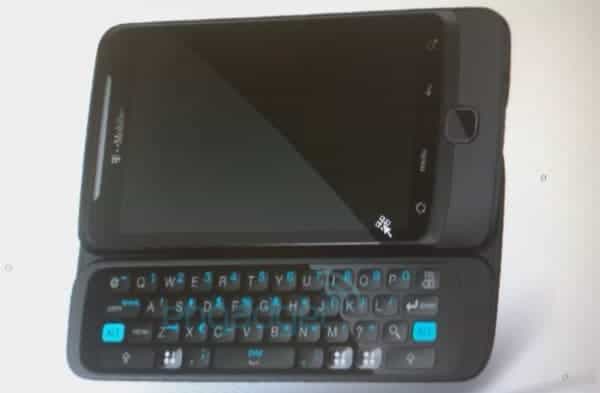