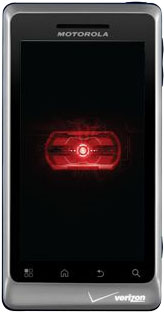 Welcome to another post about the leakiest phone ever.  While Verizon and Motorola are officially hush-hush, we think we know everything there is to know about this phone, including it's launch date of August 12.  Here is the full-on guide to this handsome new phone.

The Droid 2 is a pretty classy redesign from the original.  Where the original was a gold-accented sleek black that was all angles, the new Droid 2 is sort of silvery (hematite comes to mind), and it sports some curves.  The original Droid (like the Droid X) seems a bit masculine and imposing, but I feel that the Droid 2 is much more calm, and I would feel more comfortable using this as a day to day phone.  It's like a fancy sports car versus your day-to-day driving car.

One of the big complaints with the original Droid was that the keyboard, while better than a virtual one, pretty much sucked.  The spacing of the keys is odd for fingers, and it is left-justified because of that directional clicker.  The new one seems to be more like a normal QWERTY keyboard, but until it gets released, we have no idea how the typing experience is.

The sliding portion on the Droid 2 goes all the way to the bottom, whereas the Droid 1 had a bit of a chin (what is it with first generation Androids and chins?).  This is probably a matter of preference.  The back of the new one has a funky bluish tint that looks pretty nice.

It appears that the Droid 2 will support Mobile Hotspot like the Droid X.

The original Droid came with vanilla Android.  A lot of people chose the Droid for that reason.  Bad news- the Droid 2 comes with the same sort of customized UI as on the Droid X.  Not quite Motoblur, but not quite stock either.  I don't mind it on the Droid X, and actually the Motorola Widgets are pretty nice.  You can always get a different homescreen/launcher app.  The good news?  It ships with 2.2 Froyo, and is the first phone to do so.

Natural to phones nowadays is the carrier bloatware that they think is necessary.  This one comes with a few gems, but the list is Swype, V CAST Media Manager, NFL Mobile, and the Blockbuster app.  Ok, I guess that Swype is the single gem, and hopefully it's not necessary because of the new keyboard improvements.

We don't have official word on pricing yet, but the folks at Engadget got a picture of a Droid 2 display at Best Buy.  Looks like $199 on contract and $599 with no commitment.

What else to look out for?

According to a leaked roadmap, we are due for at least one more Verizon Droid by year's end.  It looks to be called Motorola Droid Pro, will have a 1.3 GHz processor and a four inch screen.  Also, there is a 10 inch tablet in the works by Motorola and a 7 incher by Samsung.