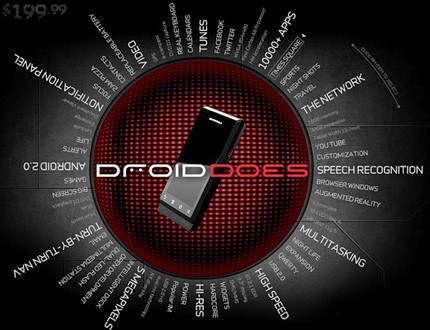 The Motorola Droid.  No single other phone can be touted as the "Bringer of Android to the Masses" more than this one.  Verizon launched an amazing marketing campaign before and during the launch of this phone.  There were more units sold in the first 74 days than with the original iPhone (1.05 million vs 1 million).  Only last month, Motorola's co-CEO Sanjay Jha, said that sales were still going "extremely well" for this phone.

Just a bit more than a month later, some sad news has come around.  Verizon or Motorola is retiring it.  It is now an end-of-life device.  There will be no more shipments from the vendor; stores will just have to deal with what they have in inventory now.

This is not actually such bad news for a number of reasons.  First, is the Droid 2.  In the recently leaked Verizon catalog, the Droid 2 is shown as being available this summer.  That means that we should be seeing this near copy-cat device in the near future.  The other reason I can think of is price.  If you have been waiting on purchasing the original Droid because the initial investment was too prohibitive, low stock means low price.  On some websites, I have seen the Droid going for $0-20 for new accounts with Verizon, but upgrade pricing has still been upwards of $100.  That price is sure to go down as the inventory dwindles.

Some other devices are also going out the door with this announcement.  The same news about price should follow with these.  Really though, why would you want a Devour with MOTOBLUR when you could have a Droid?