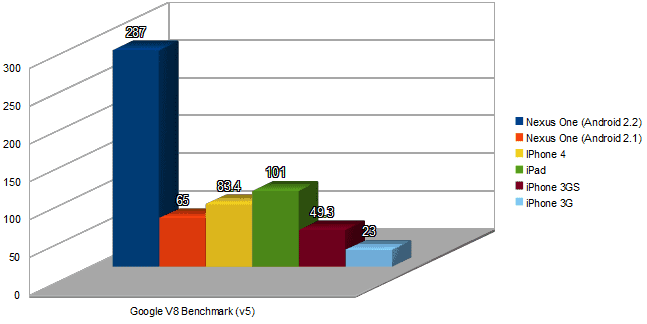 Ars Technica just did a review of the much-anticipated update of the Nexus One to Android 2.2 (Froyo) and the peformance improvements have been quite good. They ran the typical speed tests in the browser including the Google V8 benchmark and the Sunspider benchmark. The big surprise was that the Nexus One now bests the just-released iPhone 4 in these same tests by a very wide margin: over a 3x better score in the V8 benchmark and nearly twice as fast in the Sunspider benchmark.

* Note: The iPhone 3GS and iPhone 3G scores are using version 3 of the Google V8 benchmark which seems to run about 15% slower than Version 5 due to the fact that both devices failed to run version 5 of the benchmark.

Android 2.2 (Froyo) yields some big performance improvements for Android devices due to the new Just In Time compiler built-in. The latest incarnation of the open-source Android OS allows the 6-month-old Nexus One to outperform the just-releases iPhone 4 running iOS4 by a significant margin in both the major browser benchmarks. The Android 2.2 update should yield similar performance improvements on other devices like the Motorola Droid and HTC Evo, making Android phones an even better bet than before.