As many of our readers here at Android Guys know, Project Emerald is something of an obsession for me as a writer and T-Mo Android user.  The number one question of course is "what in the world is Project Emerald?!?!" Is it a tablet?  Is it a new Sidekick?  Is it the long awaited superphone to put T-Mobile back on the map with Android users?  My goal with this article is to bring together everything we know about Emerald so far, and try to make sense out of what it could be.  Read on after the break to get the latest updates on what we know about Emerald.

My journey with Emerald started way back in May when T-Mo News first broke the information that T-Mobile was working on a secret project called Emerald.  After some digging of my own, I made the prediction that the Emerald was going to the Samsung Galaxy S.  I based this prediction on two different sources that gave confirmation that Samsung would be releasing the Galaxy S on T-Mobile.

As we all know now, Emerald is NOT the Galaxy S, now known as the T-Mo Vibrant, but we did get the Galaxy S info right with the exception of the front facing camera, so on that one I can kind of grin and take a partial win.

The next information drop on Emerald came just a few short weeks ago when our own Scotty Brown got some inside info from a T-Mo rep at the HTC Seattle event. According to this rep, T-Mo was working with HTC to create the world's first dual core processor super phone, complete with a 4.3 inch screen and front facing camera.  The screen would be sporting a tech that we supposedly have never seen before. Also, it was going to be running "Android 3," which we assume means Gingerbread.  In essence, a groundbreaking EVO-like device but with more horsepower.  When Scotty asked the rep if this dual core handset was Project Emerald, the rep stopped talking and ended the conversation.  Scotty Brown's impression was that the rep felt like he may have said too much.  This is conjecture of course, but the conversation did end abruptly when Emerald was mentioned.

While Scotty was getting that info, we were getting some interesting information on a handset called the HTC Vision.  On the Android Guys Thursday Night Summer Extravaganza Podcast, I had already made the call that the HTC Vision was indeed this EVO-like device, and could very well be Project Emerald.

Which brings us up to this week, which has brought a torrent of info about T-Mo, the Vision and Emerald itself.

Let's start with the HTC Vision information that dropped recently.  First,  of which is the image which leaked out of Croatia Engadget posted a leaked image (see left) of the device (which we discussed as well).  Endgadget reported that the Vision will have a 3.7 inch display, run Android 2.1, have a 1gHz processor and is indeed coming to T-Mo in the early fall.

From this report, there we can infer that the HTC Vision is not the fabled Project Emerald, for the following reasons:

2 days ago, Android Spin released a leaked T-Mo roadmap for the remainder of 2010: 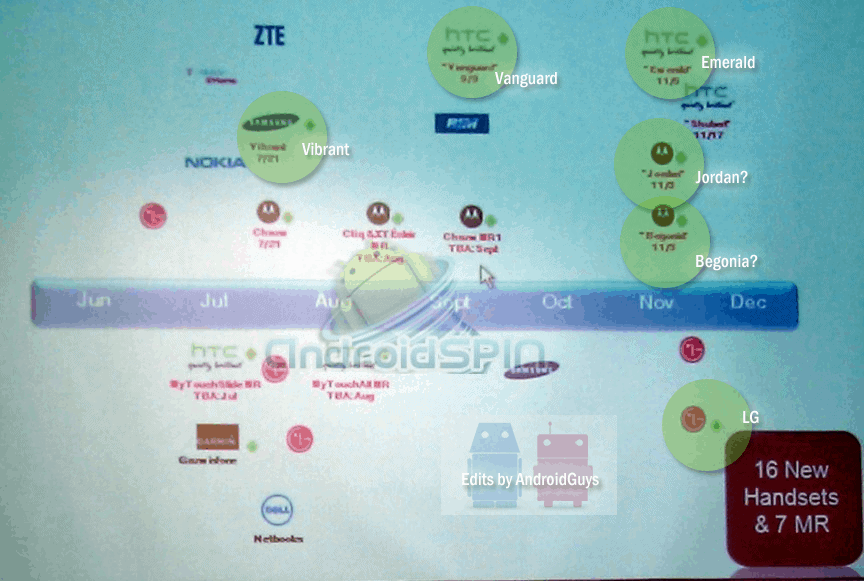 This roadmap gives us two important pieces of info about Emerald and the HTC Vision.  First, we see that if the HTC Vision is releasing in September, it cannot be Emerald.  Indeed, if that is the case the HTC Vision is going to be renamed the "Vanguard" when it launches on T-MO.

Second, and more intriguing, is that Emerald is indeed a HTC device.  Look at the graphic in November.  Do you see the very top phone listed?  Yep, it is called "Emerald" and has the HTC logo above it.  This image gives us some visual confirmation that perhaps we are on the right track with the info that Scotty Brown got in Seattle, that Emerald could indeed be the world's first dual core smartphone.  Getting excited yet?

But wait a second!  How do we know that Emerald is a phone? Hasn't it been said that HTC could be working with T-Mo to release an Android-powered tablet?  Couldn't that be what Emerald is?  Not according to HTC!  In a July 9 article on Pocket Lint, the following quote nixes that possibility:

"Eric Lin, the company's global PR and online community manager, told Pocket-lint: 'We are always looking at it, but, right now, the whole idea is that in order to be successful with a tablet, you need to have something compelling. And not just a compelling form factor.'

HTC's Global PR Manager says they are not releasing a tablet any time soon, so Emerald has to be a handset.  Another piece of the puzzle falls into place.

So with all the information that we have listed above, we arrive at what we know (or think we know) about Project Emerald:

Another  open question is whether Emerald may be a "Sidekick" branded handset, though we do have some clues.  T-Mo recently stopped selling the old Sidekick models they had in stock , making some believe that they are clearing the way for a new Sidekick to be released.  Could the Emerald superphone be named "Sidekick"? It's a possibility, but the name would be the only thing that this phone would share with other Sidekicks, since Team Danger has long since gone to Microsoft to work on the doomed Kin device.  T-Mo still owns the name Sidekick, so they can paste it onto anything want.  Either way, I do not think the Sidekick branding will come into play here, as the phone's real appeal will be its powerhouse specs if they prove to be true.

In part two of this article, we are going to take a look at the rumored specs of this super device that T-Mo is working on, speculate about what the screen tech could be, and consider whether it will help T-Mo get back into the Android game in a big way.  Look for it soon!