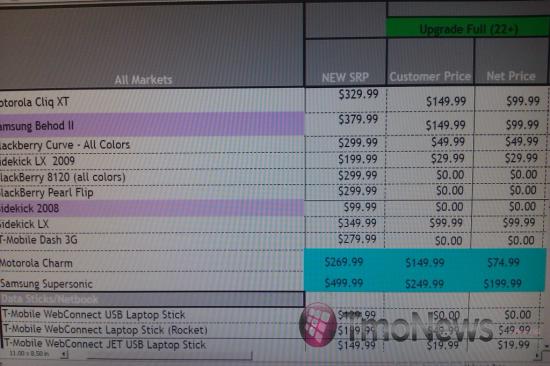 See here! If you have a hankering for some square Android action on T-Mobile, the upcoming Motorola Charm (aka the Basil) appears to be going for $149.99 after contract, or thereabouts. (If you check out the Behold II on TMo's website, it's actually being sold for free now, take this however you want.)

Also listed is the Samsung Supersonic, which may well be the Vibrant version of the Galaxy S and is listed at $499 on the top end, and either $249 or $199 after contract. (Any T-Mo people wanna clear that up for us?)

Either way, pricing hasn't been officially announced yet, so we could see things change. And the $199 price is the sweet spot these days. Let's hope we get some launch dates soon. [via TMo News]